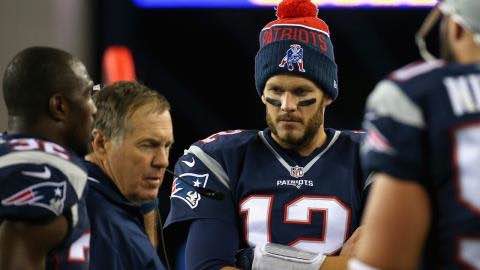 Three 8-0 Teams Are Most in NFL History

The second half of the NFL season gets underway this week and the race to the playoffs is in full swing.

"It's huge," says Bengals quarterback ANDY DALTON, who ranks second in the NFL with a 111.0 passer rating, about the team's first 8-0 start in franchise history. "We've put ourselves in the position that we're in and there aren't a lot of teams that get to 8-0. We understand that. We know that it's something that's hard to do. We've got to keep pushing and keep the same mentality that we've had the first half of the season and do whatever we can to keep winning these games in the second half."

"It's not a pretty eight, but it is eight, and that's gorgeous in itself," says Panthers quarterback CAM NEWTON, who threw three touchdown passes and rushed for one score in the team's 37-29 win over Green Bay, about the club's 8-0 start, the first in team history.

As the season moves into the second half, it's all still to be decided, with plenty of football left to play. And while every club would like to be 8-0, don't count anyone out. Since 2000, 35 teams have reached the halfway point of their season with a .500 or below winning percentage and advanced to the playoffs, including at least one in each season.

"We're just trying to win each week and then we'll pick our heads up after that last game and see if we won enough to get into the playoffs," says Philadelphia head coach CHIP KELLY, whose Eagles defeated Dallas in overtime 33-27 to even their record at 4-4. "Our mentality every single week is that we've got to go out and play. Every single game is important."

In every season since 1987, at least one team with a .500 or worse record through eight games has advanced to the postseason. Last year, Carolina (3-4-1) accomplished the feat and advanced to the NFC Divisional Playoffs.

Week 10 starts on Thursday night (8:25 PM ET, NFL Network) when the Buffalo Bills visit the New York Jets in a key AFC East battle. It will conclude on Monday night (8:30 PM ET, ESPN) when the Bengals host the Houston Texans.

Some of the other key games this weekend:

"That was a good win for our team," says Patriots head coach BILL BELICHICK. "We had to grind it out and had a lot of guys step up. They played well and did a good job of being ready to go. We made plays in all three phases of the game. That was good. It's always good to win and we're staying in the NFC East with the Giants."

The Giants have won the past three meetings between these teams, including Super Bowls XLII (17-14) and XLVI (21-17). In New York's two Super Bowl wins over New England, Giants quarterback ELI MANNING was named Super Bowl MVP both times. Manning, who guided New York to a 32-18 win at Tampa Bay last week, recorded his 96th career regular-season win, passing PHIL SIMMS (95) for the most regular-season wins by a starting quarterback in franchise history.

"They're undefeated and one of the top teams in this league," says Giants wide receiver RUEBEN RANDLE about the Patriots. "We're trying to approach this as another week. Another week that we have to go out and win to remain at the top of our division. We've got to look forward to the challenge and we all know that they're a great team."

The Panthers have won 12 consecutive regular-season games dating back to last season and are the NFC's lone unbeaten team. In last week's win over Green Bay, quarterback CAM NEWTON recorded his 15th game with at least two touchdown passes and a touchdown run. He joined Pro Football Hall of Famers STEVE YOUNG (17) and FRAN TARKENTON (16) as the only players in NFL history to have 15 such performances. Carolina's defense sealed the victory with a late interception by linebacker THOMAS DAVIS, who is the only player in the NFL this season with at least three sacks and three interceptions.

"The next game is always the biggest game," says Davis. "That's the approach we are taking right now and we're going to continue to take that approach the rest of the season. It's all about coming away with the victory. That's all that matters."

"Our team just stayed composed," says Mariota about the team's performance at New Orleans. "We believe in each other and for us moving forward, that's what we need. We're going to continue to work hard. We'll keep doing that and hopefully we'll keep pulling out some of these wins."

The Vikings have won six of their past seven games, including last week's 21-18 overtime win over St. Louis. One week after kicking the game-winning field goal at the end of regulation at Chicago, Minnesota's BLAIR WALSH converted the game-winner from 40 yards out to beat the Rams in OT.

"I really like our football team," says Vikings head coach MIKE ZIMMER. "We're a pretty resilient football team. They believe in each other. It's not always pretty, but it's always pretty when you get the win."

The Raiders enter the midpoint at 4-4 and have won two of their past three games. Oakland quarterback DEREK CARR has thrown 11 touchdowns and just one interception over the past three games (119.3 passer rating) and aims for his fourth start in a row with at least three touchdown passes. Raiders wide receiver AMARI COOPER leads all rookies with 45 catches, 653 receiving yards and four touchdown catches.

​"We have a great group of guys here," says Carr. "This team is a very resilient bunch. We're just going to keep fighting."

Arizona quarterback CARSON PALMER, who leads the NFC with 20 touchdown passes and a 110.2 passer rating, has won 19 of his past 23 starts. The Cardinals have won at least six of their first eight games for the second season in a row (7-1 in 2014), the first time the club has done that in back-to-back seasons since 1975-76. Arizona ties for the NFL lead with 13 interceptions and has four players with at least two INTs, led by safety RASHAD JOHNSON (four).

"We've got a really tough challenge coming down the road," says Cardinals wide receiver LARRY FITZGERALD, who leads the team in catches (55), receiving yards (706) and touchdowns (seven), about the team's second-half schedule. "We understand that but I think we're ready for the challenge. We're excited about it."

The Seahawks, who have won the NFC West and advanced to the Super Bowl in each of the past two seasons, are looking for a strong second half. Seattle quarterback RUSSELL WILSON has won four of his past five starts against the Cardinals and is 28-3 in his career at home, including the postseason.

"We're getting there," says Wilson. "The confidence is there in the locker room. The belief, the energy and the passion are all there. Every game is going to be a tough one, and the goal is to progress and get better week in and week out."