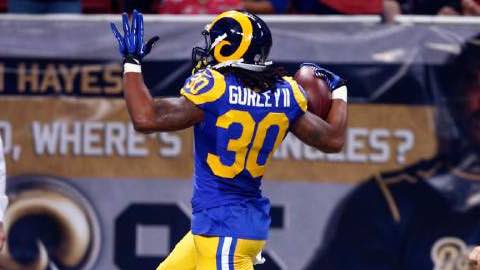 The St. Louis Rams selected running back Todd Gurley in the first round of the 2015 NFL Draft. Just five games into his NFL career, Gurley is already making his mark in the NFL's record book.

"Guys like Todd come around once every 10 years," says St. Louis head coach JEFF FISHER. "Look at his explosion and change of direction, plus his football instincts. He loves football. He loves his teammates. That's what he's all about. He's about winning football games and trying to contribute."

"Todd Gurley is the premier player on that offense right now," says NFL Network analyst and former Pro Bowl running back La Dainian Tomlinson. "He's the feature guy that they lean on. He's a rookie and, after not starting the season, it's kind of shocking that already he is the main, feature guy for that offense. But it speaks to how far along he is in his development in terms of being an NFL running back. He's made this transition seamlessly and a lot of it has to do with obviously his size and speed combination, and also his vision and how smart he is as a football player. He's truly the next great three-down back -- not just running back. He can be a three-down back."

"He can do it all," says NFL Network analyst DANIEL JEREMIAH about Gurley. "Look at everything he brings to the table. He's got size, power and consistency. I love his burst and the way he finishes runs. He's got the ability to run inside. He's got the ability to run outside. He can hit the home run. He changes the entire identity of the Rams football team and has taken them to being a potential postseason team."

In each of the past four games, Gurley has recorded a run of at least 45 yards. He is the first rookie in NFL history with a 45+ yard run in four consecutive games and only the second player ever to accomplish the feat in a season (STEVEN JACKSON, 2007).

"Todd Gurley is truly amazing," says NFL Network analyst and former Pro Bowl fullback MICHAEL ROBINSON. "He has the vision of a FRANK GORE. He has the explosion of an ADRIAN PETERSON. He's violent like MARSHAWN LYNCH. And he has the world class speed of CHRIS JOHNSON in his prime."

Gurley, despite rushing for only nine yards on six carries in his NFL debut (Week 3 versus Pittsburgh), has 575 rushing yards in his first five games to begin a career. In NFL history, only Pro Football Hall of Famer ERIC DICKERSON (645) and ADRIAN PETERSON (607) rushed for more yards in a player's first five career games.

Peterson and Gurley are the only players in NFL history with at least 100 rushing yards in four of their first five career games.

"Todd Gurley is the tone-setter for the Rams," says NFL Network analyst BUCKY BROOKS. "He's their version of Marshawn Lynch. He has given the Rams an identity. He's got the ability to run inside and outside and make big plays with those power runs. He gives them another level of physicality on their offense. Their offense is far more dynamic with Todd Gurley. I like what he brings to the table."

Todd Gurley is Rushing Into the Record Book - NFL 2015