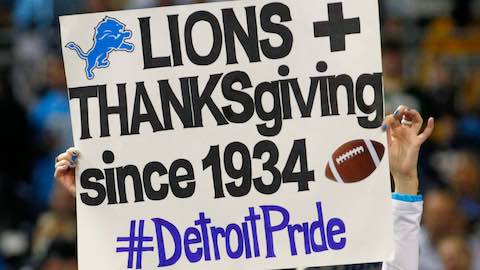 For millions of Americans, from generation to generation, Thanksgiving Day and NFL football are inextricably linked.

On Thanksgiving Day in 1925, a crowd of 36,000 -- then the largest in pro football history -- watched the Chicago Bears play the Chicago Cardinals at Wrigley Field.

​In Detroit, the relationship between the Lions and Thanksgiving football dates back to 1934 when owner G.A. Richards scheduled a holiday contest between the first-year Lions and the defending world champion Chicago Bears. The game was the first NFL game nationally broadcast, with NBC radio on the dial.

Since 1966, the Dallas Cowboys have been a Thanksgiving fixture, having hosted the annual contest for 47 of the last 49 years. In 1975 and 1977, the St. Louis Cardinals played host to the game in place of Dallas. In 1978, the game returned to Dallas for good.

From touch football games with friends to watching NFL games with relatives after a holiday feast, these football moments and memories are interwoven with the holiday season.

The 2015 installment of Thanksgiving Day NFL Football features a tripleheader for the 10th consecutive season.

The Thanksgiving Day records of the teams playing this Thursday:

Thursday's matchup marks the second time that Philadelphia travels to Detroit on Thanksgiving Day. On November 28, 1968, the Eagles defeated the Lions 12-0 behind four SAM BAKER field goals at Tiger Stadium.

Detroit enters Week 12 following an 18-13 victory over the Oakland Raiders.

"This was a tough, hard-fought game," says Lions head coach JIM CALDWELL. "We knew it was going to take a great effort to win, and we got that."

Lions quarterback MATTHEW STAFFORD passed for 282 yards and ran for a touchdown, while wide receiver GOLDEN TATE had eight catches for 73 yards in the victory. Detroit wide receiver CALVIN JOHNSON added five receptions for 88 yards in the contest. Johnson (702) became the first player in franchise history with at least 700 career receptions.

The Lions aim for their third consecutive victory this week when they face Philadelphia.

"This is positive to build upon," says Caldwell. "It's hard enough to win one game in this league, let alone two. Now we have to see if we can make it three against a really tough team with a short week on Thanksgiving Day."

Johnson aims for his seventh Thanksgiving game in row with a touchdown catch. Johnson is the all-time leader with eight career touchdown receptions on Thanksgiving. Johnson also seeks his fourth in a row on Thanksgiving with at least 100 receiving yards and a touchdown, following last season's 146-yard, two-touchdown performance against Chicago.

The players with the most career touchdown catches on Thanksgiving:

Philadelphia enters the game following a 45-17 loss to the Tampa Bay Buccaneers.

"I think everyone understands how bad that was," says Eagles linebacker CONNOR BARWIN. "It was disappointing. We'll go watch the film and evaluate. We have to get it fixed and play better on Thursday against Detroit."

"You have to be a pro and move on," says quarterback MARK SANCHEZ, who passed for 261 yards and two touchdowns against the Buccaneers. "We are going to get another chance to play on Thanksgiving, which is going to be great. You get to have your family back at home watching, and then get a mini-bye the week after that. This could be the start of something good. We'll figure it out and try to get a win on Thursday."

Sanchez completed 20 of 29 passes (69 percent) for 217 yards and scored two touchdowns (one passing, one rushing) in his start on Thanksgiving last season. Eagles running back DE MARCO MURRAY, who has played in three career games on Thanksgiving, aims for his fourth in a row with at least 100 scrimmage yards.

Philadelphia, who is undefeated in Thanksgiving Day games, plays on the holiday for the second consecutive season. Last season, the Eagles defeated the Dallas Cowboys 33-10 at AT&T Stadium. Philadelphia has the highest winning percentage among active NFL franchises on Thanksgiving (minimum five games).

The Panthers enter Week 12 after defeating Washington 44-16 to improve to 10-0 for the first time in team history.

"10-0 feels great," says Carolina quarterback CAM NEWTON. "Usually we have 24 hours to celebrate but the fact that we have a short week upcoming, we need to come back and be ready for Dallas on Thanksgiving."

"It's exciting for our players to be able to compete on Thanksgiving Day," says Panthers head coach RON RIVERA, who played on Thanksgiving Day in 1992 as a linebacker for the Chicago Bears. "Every season presents challenges, regardless of when the games are played. We have to take advantage of those opportunities."

Carolina prepares to face Dallas with the third ranked defense (322.8 yards per game) in the NFC. Linebacker THOMAS DAVIS is only player in NFL with at least three sacks and three interceptions this season. He also leads the team with 69 tackles. Safety KURT COLEMAN and cornerback JOSH NORMAN are tied for first in the NFC with four interceptions this season. Linebacker LUKE KUECHLY, who is second on the team with 68 tackles this season, had 15 tackles and a fumble recovery in his only career matchup against the Cowboys.

The Cowboys seek their second consecutive victory following a 24-14 win over Miami.

Dallas quarterback TONY ROMO passed for 227 yards and two touchdowns against the Dolphins, including a touchdown pass to wide receiver DEZ BRYANT. The touchdown marked the 50th between Romo and Bryant, the most by a quarterback-wide receiver tandem in franchise history, surpassing Pro Football Hall of Famers TROY AIKMAN and MICHAEL IRVIN (49).

"We just have to get back to work," says Cowboys head coach JASON GARRETT about preparing for a quick turnaround. "We'll go to work because that's what we do. We love playing football, we love coaching football. These guys love playing with each other. We are excited about the opportunity we have. We have a game on Thursday. The Carolina Panthers are coming to town. They are a darn good football team."

The Cowboys enter their matchup against the Panthers having won six of their past nine on Thanksgiving.

Romo has led the Cowboys to six wins in eight Thanksgiving starts. For his career, Romo has passed for 2,232 yards and 18 touchdowns on Thanksgiving, both the most all-time on the holiday.

The most career passing yards and touchdown passes on Thanksgiving Day:

"Romo gives everybody some extra juice," says Bryant about Romo, who returned to the starting lineup following an injury he sustained in Week 2. "His play just shows how much he really means to the team. We all know who our leader is. Tony is outstanding. He just makes good things happen."

Tight end JASON WITTEN, who will play in his 13th Thanksgiving Day game this week, is currently the all-time leader on Thanksgiving with 66 catches. His 740 receiving yards trail only HERMAN MOORE (834) for the most all-time on Thanksgiving.

The most career receptions and receiving yards on Thanksgiving Day:

Witten also ranks second all-time amongst tight ends with 994 receptions and needs six catches on Thursday to join TONY GONZALEZ (1,325) as the only tight ends in league annals with 1,000 career receptions.

Green Bay and Chicago cap off a full day of Thanksgiving football with an NFC North matchup on Thursday night.

The Packers host their first Thanksgiving Day game since 1923 when they defeated the Hammond Pros 19-0 at Bellevue Park in Green Bay.

"I think it's great, and it will be great for our fans," says Packers head coach MIKE MC CARTHY about hosting a Thanksgiving Day game at home. "The first time we've had a Thanksgiving night game here at Lambeau Field. I think it will definitely be a special night."

Adding to the excitement, the Packers will honor former quarterback BRETT FAVRE during a halftime ceremony. Favre's name and retired No. 4 jersey will be unveiled on Lambeau Field's north facade during halftime of Thursday's game. Favre, who played in four Thanksgiving Day games in his career, is one of six Packers legends to have their number retired, joining Pro Football Hall of Famers DON HUTSON (No. 14), TONY CANADEO (No. 3), BART STARR (No. 15), RAY NITSCHKE (66) and REGGIE WHITE (92).

Quarterback AARON RODGERS passed for 212 yards and two touchdowns against the Vikings. Wide receiver JAMES JONES had six receptions for 109 yards and a touchdown in the game. Jones now has seven touchdown receptions this season, which is tied for second in the NFC. Packers running back EDDIE LACY added 100 rushing yards in the victory, his first 100-yard rushing performance this season.

Heading into this week's matchup, Rodgers has led the Packers to a 5-1 record when he starts on Thursdays, including a 4-0 record against NFC North opponents. Since 2009, Rodgers is among the leaders in many passing categories on Thursdays, ranking first in the NFC in completion percentage (70.9), touchdown passes (13) and passer rating (113.4). He is also fifth in the NFC with 1,531 passing yards on Thursdays during that span.

"We can't afford to hang our heads," says Chicago guard MATT SLAUSON. "We aren't out of this by any stretch. We just need to keep on fighting and keep working."

The Bears will play on Thanksgiving in back-to-back seasons for the first time since 1980-81 after losing to Detroit on Thanksgiving last season. The Bears played on Thanksgiving during the franchise's first 19 years of existence (1920-38) and are 16-15-2 all-time on the holiday.

"We have to come in and flip the switch pretty quickly," says Bears quarterback JAY CUTLER. "We have to move on. It is part of the game. We have a Thursday night game against Green Bay and hopefully we'll be energized for it this week on Thanksgiving."

Cutler aims for his fourth straight game on Thursday with at least two touchdown passes. Wide receiver ALSHON JEFFERY, who has 15 catches for 166 yards and three touchdowns in his past two games on Thursday, seeks his third consecutive Thursday game with a touchdown catch.