Wilson Playing QB as Well as It Can Be Played 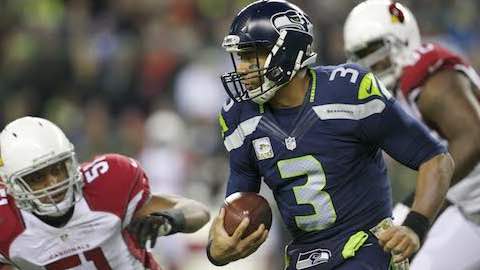 Wilson Playing QB as Well as It Can Be Played (Photo: Drew Sellers, SportspressNW)

Since 1960, the beginning of the modern NFL era, no quarterback has produced a more efficient four-game run in combined passer rating than Seattle's Russell Wilson.

There is not a chance QB Russell Wilson will receive consideration for the NFL's MVP award, not with the Seahawks saddled with five losses. QB Cam Newton is a lock for leading the Carolina Panthers to a 13-0 start and putting up numbers as gaudy as Wilson's. Arizona QB Carson Palmer would also be ahead of Wilson, even though Wilson has forced his way into the conversation with a four-week spree of utter virtuosity.

Worthy as they are, neither Newton nor Palmer have produced a run this season comparable to Wilson's past four games, in which he has tossed 16 touchdown passes, including five Sunday in Baltimore, without being intercepted and without three primary weapons, RB Marshawn Lynch, TE Jimmy Graham and, now, RB Thomas Rawls.

In one sense, Brady produced the king of hot streaks. In 2007, en route to 50 touchdowns vs. eight interceptions, the New England quarterback had a four-game stretch against Cleveland, Dallas, Miami and Washington in which he threw 17 TDs and no picks. He also had another four-game rampage that year of 12 TDs and no interceptions.

Manning came close to Brady in the first four games of his Denver career in 2013 when he opened with seven TDs and no picks against Baltimore and finished his run with 16 TDs and no picks. Wilson has now matched that and might have matched Brady’ 17/0 if TE Luke Willson hadn't dropped an easy ball in the end zone Sunday.

In the process, Wilson has staked a claim as the most efficient passer over any four-game span in modern NFL history.

Wilson's combined passer rating over Seattle's last four is 145.9, and he leads the NFL with a season rating of 110.0. We looked at all quarterbacks dating to 1960 in order to determine how many had a rating of at least 120 in each of four consecutive games, including overlapped seasons. Only six with a minimum of 100 pass attempts made the list (Brady had a combined 136.2 rating during his 17-TD, 0-INT streak, but did not have a 120 or higher mark in every game):

So Wilson has performed at an efficiency level unmatched over any four-game spread. Most astonishing are Wilson's numbers from the pocket: 81-for-96 (84.3 percent) for 1,094 yards with 15 touchdowns and zero interceptions. That's a rating of 153.7 on a scale where 158.3 is perfect, which means Wilson is playing quarterback about as well as the position can be played.

For more than three seasons, the conventional wisdom has been that the way to minimize Wilson's impact on a game is to keep him in the pocket. But he's completely blown that notion out of opponents' playbooks in a stunning, historic way.

Wilson would not have had an opportunity for such rarefied deeds had not Seattle's offensive line, largely pathetic for the season's first two months, come together over the last one. Credit that development to Tom Cable, who should be the first assistant named NFL Coach of the Year. Won't happen, but it ought to.

Starting with a 39-32 loss to Arizona Nov. 15, the Seahawks have scored 29 or more points in five consecutive games. After losing to the Cardinals, Seattle defeated San Francisco 29-13, Pittsburgh 39-30, Minnesota 38-7 and Baltimore 35-6 — the longest streak of 29+-point games in franchise history.

After obliterating four consecutive opponents, the Seahawks are receiving the platitude that pundits trot out annually to one, if not several, hot teams in the late going: No one wants to face Seattle in the postseason.

Maybe so, but the Seahawks have defeated an elite quarterback only once all season, and in that game Ben Roethlisberger shredded Seattle for 456 passing yards, an opponent record. Seattle escaped with a 39-30 win.

The Seahawks have beaten Jimmy Clausen twice and knocked around the likes of Blaine Gabbert and Colin Kaepernick. But they allowed nearly 300 passing yards per game — and lost to — three NFC quarterbacks they could see in the postseason, Aaron Rodgers, Cam Newton and Carson Palmer.

Seattle is 7-1 this season in games against non-elite quarterbacks and 1-4 against elite ones, as the charts show:

If the season ended today, the fifth-seeded Seahawks would travel to Washington (6-7) to face the fourth-seeded Redskins and QB Kirk Cousins in a wild card game. The 4-5 game winner draws the No. 1 seed, which is undefeated Carolina, in the conference semifinal at Charlotte.

NFL Football: "Wilson Playing QB as Well as It Can Be Played"