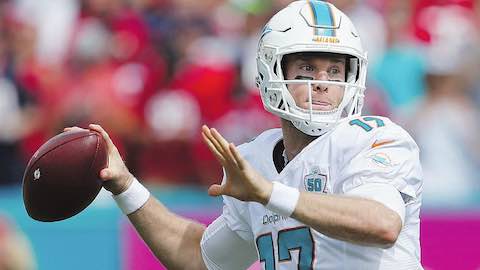 ​Brady (55,312) surpassed 55,000 career passing yards and is only the fifth quarterback in NFL history to reach the mark.

Brady also started his 213th game for the Patriots, passing Bruce Armstrong (212) for the most starts in team history.

Washington quarterback KIRK COUSINS completed 33 of 40 passes for 317 yards with three touchdowns for a 124.7 passer rating in Washngton's 31-30 victory against Tampa Bay.

Cousins' third touchdown pass, a six-yard completion to tight end JORDAN REED with 24 seconds remaining in the game, was his second game-winning score in the final 30 seconds of regulation this month.

Cousins also threw a game-winning score to wide receiver PIERRE GARÇON with 26 seconds to play against Philadelphia in Week 4 and is the first quarterback since DREW BLEDSOE (2005) to throw game-winning touchdown passes in the final 30 seconds of the fourth quarter twice in the same calendar month.

Miami Dolphins quarterback Ryan Tannehill completed 18 of 19 passes (94.7 percent) for 282 yards with four touchdowns, no interceptions and a 158.3 passer rating -- the highest possible mark -- in the Dolphins' 44-26 win over Houston.

Tannehill completed his first 18 passes of the game and, combined with his seven completions in a row to end the Dolphins' Week 6 game at Tennessee, set an NFL record with 25 consecutive completions (Donovan McNabb, 24 in 2004).

The league-wide yards-per-pass attempt average, currently at 7.32, is also on pace to be the highest of any season in the Super Bowl era.