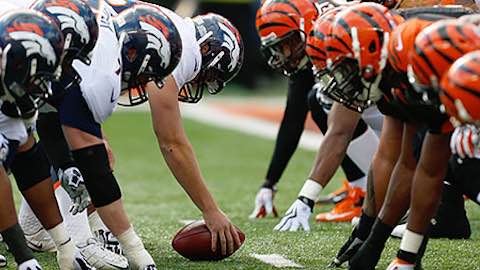 "At the end of the day, you've just got to take care of your own business," says New York Jets wide receiver ERIC DECKER. "We've got two big games ahead of us against two division opponents. We've got to come out and play our best."

Through the first 15 weeks, six postseason berths have been clinched. Carolina (NFC South, first-round bye), New England (AFC East, first-round bye) and Arizona (NFC West) have each won its division. Cincinnati, Green Bay and Seattle have all secured a playoff berth. And with two weeks left, there are still 18 teams in contention for a trip to Super Bowl 50.

"We have to keep living week in and week out," says Pittsburgh head coach MIKE TOMLIN. "We don't take wins for granted in this league and hopefully succeeding in the face of adversity strengthens us for the battles that await."

There are six playoff spots up for grabs, including five division titles.

In the AFC, New England can secure home-field advantage this week. Cincinnati has a chance to lock up the AFC North and earn a first-round bye. Denver can wrap up a playoff berth and the AFC West title. Houston can win the AFC South. And Pittsburgh and Kansas City can each secure a postseason spot.

[ Check out the NFL Playoff Scenarios for Week 16 ]

In the NFC, Carolina can clinch home-field advantage this week. Arizona can lock up a first-round bye. Green Bay can win the NFC North. Washington can secure the NFC East. And Minnesota can clinch a postseason berth.

Some of the key games in Week 16 with possible playoff clinching scenarios:

First place in the NFC East is on the line when the Eagles host Washington on Saturday night. With two games remaining, Washington (7-7) enters Week 16 with a one-game lead over Philadelphia (6-8) and the New York Giants (6-8).

Washington defeated Buffalo last week 35-25 as quarterback KIRK COUSINS threw for 319 yards and four touchdowns and added a rushing touchdown. Washington will clinch the division with a victory over the Eagles.

The Eagles, however, can take the NFC East with wins in each of their final two games against Washington and the Giants.

Carolina is the fourth team in the Super Bowl era to start 14-0 and can clinch home-field advantage throughout the NFC playoffs with a victory on Sunday at Atlanta. Last week, the Panthers defeated the New York Giants 38-35 as quarterback CAM NEWTON became the first player in NFL history to have at least 300 passing yards (340), five touchdown passes and 100 rushing yards (100) in a single game.

The Falcons remain alive in the NFC at 7-7 and will look to keep their playoff hopes alive with wins over Carolina and New Orleans to close out the regular season. Last week, Atlanta won at Jacksonville 23-17 as wide receiver JULIO JONES had nine catches for 118 yards and a touchdown.

The Steelers rallied back from a 27-10 deficit by scoring 24 unanswered points in the team's 34-27 win over Denver last week. With the victory, Pittsburgh improved to 9-5 and can clinch a playoff berth this weekend with a victory and a New York Jets loss. In the win over the Broncos, Steelers quarterback BEN ROETHLISBERGER passed for 380 yards and three touchdowns while wide receiver ANTONIO BROWN had 16 catches for 189 yards and two touchdowns.

Kansas City defeated Baltimore 34-14 last week and is the only team in NFL history to win eight consecutive games immediately following a five-game losing streak in the same season. At 9-5, the Chiefs can clinch a playoff berth with a victory and a loss by either Pittsburgh or the New York Jets.

The Patriots, who defeated Tennessee 33-16 last week, can clinch home-field advantage throughout the AFC playoffs with a win over the Jets. New England is the second team in NFL history to win at least 12 games in six consecutive seasons (Indianapolis, 2003-09).

​The Jets won at Dallas 19-16 in Week 15 and improved to 9-5 as quarterback RYAN FITZPATRICK passed for 299 yards and a touchdown. New York is currently tied with both Kansas City and Pittsburgh at 9-5 in the AFC Wild Card race.

The Texans moved into sole possession of first place in the AFC South with last week's 16-10 win at Indianapolis. Houston quarterback BRANDON WEEDEN came on in relief and threw the game-winning touchdown pass to rookie wide receiver JAELEN STRONG in the fourth quarter. The Texans can clinch the division title this weekend with a win and an Indianapolis loss.

Green Bay defeated Oakland 30-20 last week to clinch a playoff berth and leads the NFC North by one game. In the win at Oakland, rookie cornerback DAMARIOUS RANDALL had his first career interception-return touchdown as the Packers used two early interceptions to set up a 14-0 lead. Green Bay can secure the division title this weekend with a win and a Minnesota loss. The Packers and the Vikings will meet in Week 17.

The Cardinals have won a franchise-record 12 games and clinched the NFC West last week with a 40-17 win at Philadelphia. Arizona rookie running back DAVID JOHNSON rushed for 187 yards and three touchdowns, becoming the first player in franchise history to rush for at least 180 yards and three touchdowns in a game. With a victory over Green Bay, the Cardinals will secure a first-round bye.

The Giants enter Week 16 one game behind Washington in the NFC East. New York is currently tied with Philadelphia, whom the Giants will face in Week 17. The Giants can still win the division title but will need to win their remaining two games and get help along the way.

Minnesota knocked off Chicago 38-17 in Week 15 to improve to 9-5 and move one step closer to a postseason berth. Vikings quarterback TEDDY BRIDGEWATER became the second quarterback in NFL history -- and first since 1964 (FRANK RYAN) -- to complete at least 85 percent of his passes with four touchdowns and no interceptions and rush for a touchdown in a single game. The Vikings will clinch a playoff berth this weekend with a win. Additionally, if Minnesota wins this week and defeats Green Bay in Week 17, the Vikings will win the NFC North division title.

Cincinnati improved to 11-3 with a 24-14 win at San Francisco last week as quarterback AJ MC CARRON posted a 115.6 passer rating in his first NFL start and running back JEREMY HILL rushed for two touchdowns. The Bengals can clinch the AFC North division title and a first-round bye with a win on Monday night.

The Broncos can secure a playoff spot in Week 15 with a win and a loss by either Pittsburgh or the New York Jets. Denver will clinch the AFC West division title with a victory over Cincinnati and a loss by Kansas City.