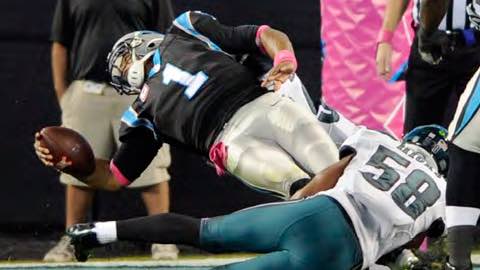 The Carolina Panthers and New England Patriots joined the Cincinnati Bengals, Denver Broncos and Green Bay Packers as the only teams in the NFL with a 6-0 record this season.

Carolina won 27-16 on Sunday Night Football against Philadelphia, while New England defeated the New York Jets 30-23. The Bengals, Broncos and Packers all had a bye.

​Brady (55,312) surpassed 55,000 career passing yards and is only the fifth quarterback in NFL history to reach the mark.

Brady also started his 213th game for the Patriots, passing Bruce Armstrong (212) for the most starts in team history.

New England tight end Rob Gronkowski had 11 catches for 108 yards and a touchdown in the Patriots' victory over the New York Jets. Gronkowski now has 60 touchdown receptions in 71 career games, the third-fastest player to reach the milestone and the fastest tight end to do so.

The Carolina Panthers are 6-0 for the first time in franchise history after a 27-16 win over Philadelphia on Sunday Night Football.

Carolina overcame three turnovers as the defense was strong when it mattered, holding Philadelphia to field goals in two red zone possessions and allowing just 37 yards on the Eagles final three possessions.

On offense, Cam Newton posted his fourth game of the season with a passing touchdown and a rushing touchdown and running back Jonathan Stewart rushed for 125 yards, breaking the Eagles streak of 18 consecutive games without allowing a 100-yard rusher. Fullback Mike Tolbert scored twice for the Panthers.