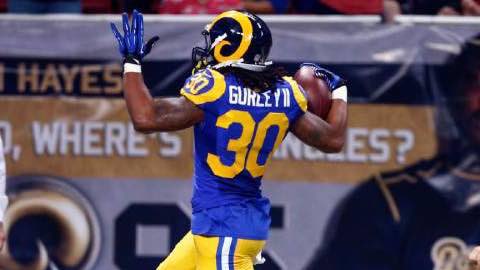 The NFL has entered the second half of the season and rookies around the league continue to make an impact.

Rookies have made key contributions on offense, defense and special teams.

Wide receivers STEFON DIGGS of Minnesota and JAMISON CROWDER of Washington have become dependable targets. And quarterback JAMEIS WINSTON has guided Tampa Bay as the team's starter at the position.

Defensively, linebackers ERIC KENDRICKS of the Vikings and KWON ALEXANDER of the Buccaneers have played significant roles for their clubs while DAMARIOUS RANDALL of Green Bay has played well at cornerback.

Some rookies, such as Arizona's DAVID JOHNSON, Seattle's TYLER LOCKETT and Detroit's AMEER ABDULLAH, have become threats in multiple phases of the game with highlight-reel plays on both offense and special teams.

"He's been successful and he's a player that knows how to make big plays," says former Lions running back and Pro Football Hall of Famer Barry Sanders. "He's a guy that you really would love to get in space. I think he can certainly have a bright future."

Alexander has started all nine games and has recorded 63 tackles, two sacks, two interceptions, seven passes defensed, a forced fumble and a fumble recovery. He is the only player in the NFL this season with two sacks, two interceptions, a forced fumble and a fumble recovery. Alexander was named the NFC Defensive Player of the Week for his performance in the Buccaneers' Week 8 win at Atlanta.

Crowder leads NFC rookies with 42 receptions and ranks second among rookies in the conference with 402 receiving yards. He has at least four catches and 40 receiving yards in seven of his nine games and his seven such performances are the second-most by a rookie this season.

"He's just a very talented player and he's got the right mindset," says Washington quarterback Kirk Cousins. "I'm excited for him and he's only halfway through his first year. He's a great teammate and a great worker. It's fun to have weapons like him to throw to. It really makes a difference."

Despite playing in only six games, Diggs ranks second among all rookies with 507 receiving yards (30 catches, two touchdowns). Diggs, who made his debut in Week 4, is the only rookie in NFL history to begin his career with four consecutive games with at least 85 receiving yards. During that stretch, he also recorded back-to-back 100-yard games, becoming the first Vikings rookie to do that since Randy Moss in 1998.

"I'm excited about him," says former Vikings wide receiver and Pro Football Hall of Famer Cris Carter. "I'm very happy for him and I know he's going to get a great opportunity. He's still developing but he has a lot of things that you want in a wide receiver. He's got the ability to make tough catches, run good routes and be explosive in and out of the break."

Gurley, who has played in seven games this season, leads all rookies with 709 rushing yards and ties for the NFL rookie lead with five rushing touchdowns. Gurley is the only rookie in NFL history to rush for at least 125 yards in four consecutive games and the first rookie during the Super Bowl era to rush for at least 85 yards in each of his first five career starts. He and Adrian Peterson are the only rookies in league history to have four 100-yard rushing performances in their first five career games. Gurley was named the NFL Offensive Rookie of the Month for October. Since making his first start in Week 4, Gurley's 700 rushing yards are the most in the NFL during that span.

"Guys like Todd come around once every 10 years," says St. Louis head coach Jeff Fisher. "Look at his explosion and change of direction, plus his football instincts. He loves football. He loves his teammates. That's what he's all about. I keep bringing up that 'S' word, which is 'special.' I've been saying that he's special."

"He's just a special player," says Arizona quarterback Carson Palmer. "He covers so much ground with each stride and it's very deceiving. It doesn't look like he's as fast as he is. He's got a long and powerful stride that it almost looks effortless. He's got so much power behind each step."

Kendricks has appeared in seven games this season, including four starts, and has recorded 42 tackles and four sacks, tied for the most by a rookie. After making his first start in Week 4 at Denver, Kendricks took over as a starter and was named the NFL Defensive Rookie of the Month for October.

"He learns from his mistakes," says Minnesota defensive coordinator George Edwards. "He does a good job of studying and transferring from the classroom to the field. He comes to work every day, he's a true pro and he pays attention to detail. He's able to perform on Sundays."

"He's a dual purpose back," says Chicago head coach John Fox. "He can run the ball and he can catch. He's explosive. And he can take short runs and turn them into long runs."

"We drafted him to give us a spark in the return game, which is an area we wanted to see if we could improve and be more dynamic," says Seattle head coach Pete Carroll. "And he's done that."

Randall leads all NFC rookies with 11 passes defensed and his two interceptions are tied for the most by a rookie in the conference. Randall has recorded at least one pass defensed in eight of his nine games, including back-to-back games with an interception in Weeks 8 and 9. He has added 34 tackles this season.​

"When the ball has been thrown his way, he's made sure they haven't caught it," says Green Bay cornerbacks coach Joe Whitt Jr. "He's a football junkie. He's a gym rat. He's a football guy and that's exciting. He believes in his talent."

Winston, the No. 1 overall selection in the 2015 NFL Draft, has started all nine games and recorded four wins. He has completed 164 of 285 passes (57.5 percent) for 2,159 yards and 10 touchdowns with nine interceptions for an 80.1 passer rating. Winston has also rushed for 118 yards and four touchdowns, the second-most by a quarterback this season. He has posted a passer rating of at least 100 three times and has five games without an interception.

"Jameis is growing fast," says Tampa Bay offensive coordinator Dirk Koetter. "He's doing a good job and he continues to improve. He's being smarter with the football, smarter with his decisions and, for the most part, getting the ball out of his hand quicker."