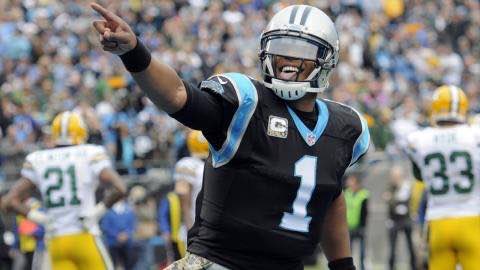 The second half of the NFL season gets underway this week. Here's a look at the top NFC players so far this season and what we project for the rest of the season

QB CARSON PALMER leads the NFC with 20 touchdown passes and is on pace to set the club's single-season mark currently held by Kurt Warner (30 in 2008). Palmer also leads the conference with a 110.2 passer rating, which would be the best single-season mark in club history (Warner, 96.9 in 2008)

WR LARRY FITZGERALD has seven receiving touchdowns and looks to pass Sonny Randle's single-season club record of 15 set in 1960. Fitzgerald has 706 receiving yards and is on track for his seventh career 1,000-yard season, the most in franchise history

S RASHAD JOHNSON has four interceptions and can be the first Cardinal with 10 interceptions in a season since Pro Football Hall of Famer Larry Wilson (10) in 1966.

RB DEVONTA FREEMAN leads the NFL with 1,141 scrimmage yards and 11 touchdowns. Freeman is aiming to set single-season franchise records in both categories held by William Andrews (2,176 scrimmage yards set in 1983) and Michael Turner (17 touchdowns set in 2008)

WR JULIO JONES leads the NFL with 80 receptions and can challenge the NFL single-season record held by Marvin Harrison (143 in 2002). Jones needs 50 catches to join Harrison as the only players with 130 receptions in a season. Jones is on pace for 1,829 receiving yards, which would surpass the team record he set last season (1,593)

TE GREG OLSEN leads the team with 584 receiving yards and five touchdown catches and can become the first Panther with at least 1,000 yards and 10 touchdowns since Steve Smith, Sr. in 2005

DT KAWANN SHORT has six sacks and can pass Kris Jenkins (seven in 2002) for the most sacks in a season by a DT in franchise history. LB THOMAS DAVIS leads the team with 65 tackles and is the only player in the NFL with at least three sacks and three interceptions this season.

QB JAY CUTLER has thrown 139 touchdown passes with the Bears and passed Pro Football Hall of Famer Sid Luckman (137) for the most in franchise history. Cutler has 1,787 passing yards and is on pace for his third 3,500-yard season with Chicago. He is the only quarterback in team history to have multiple 3,500-yard passing seasons

RB MATT FORTÉ has 767 scrimmage yards in seven games and is aiming to join Pro Football Hall of Famer Curtis Martin and LaDainian Tomlinson as the only players with at least 1,400 scrimmage yards in each of his first eight seasons to begin a career

TE MARTELLUS BENNETT leads the team with 45 receptions and is on track for his second consecutive 90-catch season.

TE JASON WITTEN leads the team with 44 receptions -- tied for the second-most by a TE this season -- and is on pace for his seventh career 80-catch season, which would be the second-most in NFL history (Tony Gonzalez, eight). Witten has 987 career receptions and needs 13 to join Gonzalez as the only TEs in league annals with 1,000 catches

WR DEZ BRYANT has 42 touchdown receptions since the start of the 2012 season, the most in the NFL during that span

K DAN BAILEY has converted 130 of 143 career field-goal attempts and his 90.9 conversion percentage is the highest in NFL history (minimum 100 made field goals). He has 64 points and is on pace for his fifth consecutive 100-point season.

WR CALVIN JOHNSON reached 11,000 career receiving yards (11,064) in his 127th game, becoming the fastest player in NFL history to eclipse the 11,000-yard mark. Johnson is on pace for his seventh career 1,000-yard season and sixth such season in a row. He already holds team records in both categories

QB AARON RODGERS has a 108.2 passer rating and can extend his NFL-record streak to seven consecutive seasons with a 100+ passer rating. Rodgers has a 106.2 passer rating in his career, the highest mark in NFL history (minimum 1,500 attempts)

WR RANDALL COBB has 40 catches for 476 yards and five touchdowns and can join Sterling Sharpe (1992-94) and Antonio Freeman (1997-98) as the only Packers with at least 80 catches, 1,000 receiving yards and 10 touchdown catches in back-to-back seasons

LB JULIUS PEPPERS leads the team with 5.5 sacks and is on pace for his ninth career 10+ sack season, which would tie Pro Football Hall of Famer John Randle for the fourth-most in NFL history.

RB ADRIAN PETERSON has 758 rushing yards and is closing in on his seventh career 1,000-yard rushing season. Peterson reached 90 career rushing touchdowns and is tied with Pro Football Hall of Famers Eric Dickerson and Curtis Martin for 12th on the all-time list. Peterson has 17 career touchdown runs of at least 40 yards -- including two this season -- and ranks second in NFL history behind Hall of Famer Barry Sanders (20)

QB TEDDY BRIDGEWATER has won six of his past seven starts and has 12 victories in his first 20 career starts.

WR WILLIE SNEAD (626), WR BRANDIN COOKS (603) and TE BENJAMIN WATSON (532) are aiming to become the first trio in franchise history to each record at least 1,000 receiving yards in the same season.

QB ELI MANNING has 96 regular-season wins and 104 total victories as a starting quarterback and passed Phil Simms (95 and 101) for the most by a Giants quarterback in both categories. Manning, who has passed for 2,339 yards, is on pace for his team-record fifth 4,000-yard season. Manning has 19 touchdown passes and can pass Pro Football Hall of Famer Y.A. Tittle (two) for the most seasons with at least 30 touchdown passes by a Giant with three

QB SAM BRADFORD has 2,061 passing yards and is on pace to be the first quarterback in franchise history to pass for at least 4,000 yards in a season

WR JORDAN MATTHEWS has 48 receptions and is on track to set the team record for the most catches in a season (Brian Westbrook, 90 in 2007)

DE FLETCHER COX leads the team with five sacks and is on pace to reach 10+ sacks for the first time in his career.

WR-PR TAVON AUSTIN leads the team with seven touchdowns (four receiving, two rushing, one punt return) and has 16 career TDs (eight receiving, five rushing, three punt returns). He is the only player in NFL history with a 75+ yard punt-return touchdown in each of his first three seasons

DT AARON DONALD has 4.5 sacks and can be the first DT in team history to record at least nine sacks in back-to-back seasons. DE ROBERT QUINN has five sacks in seven games and is on track for his fourth consecutive 10+ sack season.

LB AARON LYNCH leads the team with six sacks and is the third 49ers player since 2000 with at least six sacks in each of his first two seasons (Aldon Smith, Andre Carter)

K PHIL DAWSON has scored 52 points and is aiming for his fourth consecutive 100-point season and the ninth such season of his career.

Since 2011, RB MARSHAWN LYNCH has 5,732 rushing yards and 50 rushing touchdowns, which are both the top marks in the NFL

TE JIMMY GRAHAM, in his first year with the Seahawks, is on pace for 76 catches and 900 receiving yards, which would both be team records for a TE

Since entering the league in 2011, CB RICHARD SHERMAN has 24 interceptions, the most in the NFL

RB DOUG MARTIN has 791 scrimmage yards and is on target to join James Wilder (1984-85) as the only players in team history with multiple 1,500-yard seasons

WR MIKE EVANS leads the team with 538 receiving yards and is on pace to become the first Buccaneer to record at least 1,000 receiving yards in each of his first two seasons to begin a career

DT GERALD MC COY has 4.5 sacks and is on track for his third consecutive season with at least 8.5 sacks. McCoy would join Pro Football Hall of Famer Warren Sapp (four) as the only DTs in club history to have three such seasons and McCoy would be the first to do it three years in a row.

TE JORDAN REED has 38 catches in six games played and is looking to set a franchise single-season record for the most receptions by a TE (Chris Cooley, 83 in 2008). Reed is on track to become the first TE in team history with at least 850 receiving yards in a season

LB RYAN KERRIGAN ties for the club lead with 3.5 sacks. Since entering the NFL in 2011, Kerrigan is the only player in the league with at least 40 sacks (41.5), 15 forced fumbles (16) and two interception-return touchdowns (two).