Broncos Defense Off To Historic Start 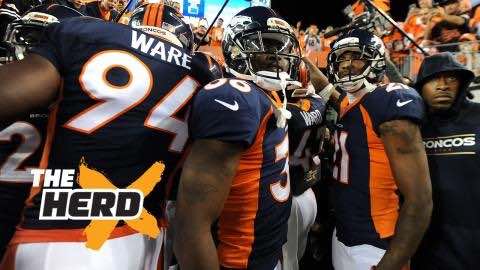 Broncos Defense Off To Historic Start

With their stalwart defense leading the way, the Denver Broncos are one of four remaining undefeated NFL teams in 2015. Is the Broncos' defense good enough to win a championship?

The Denver Broncos lead the NFL in total defense (261.1 yards per game) and scoring defense (16.0 point per game) this season on their way to reaching 7-0 for the second time in franchise history. This season marks the best start for the Broncos since 1998, when Denver began the season 13-0 en route to its second consecutive Super Bowl title.

"They can beat you from a lot of different ways," says NFL Network analyst and former Patriots defensive end WILLIE MC GINEST of the Broncos' top-ranked defense. "They have guys up front that are interchangeable that can constantly get after the quarterback. They've got corners that they can lock down with anybody in the league and go play one-on-one."

In Week 8, the Broncos' defense was nothing short of dominant against the previously undefeated Packers. Denver limited Green Bay to 140 total net yards, the fifth-fewest allowed against a team with a record of 6-0 or better in NFL history.

The fewest yards allowed in a game against an opponent that was 6-0 or better:

Denver's defense leads the league with 29 sacks, providing consistent pressure up front. The Broncos also feature one of the league's top defensive backfields, which has contributed an AFC-best nine interceptions.

The Broncos have not allowed a first-quarter point this season, and are one of nine teams since the 1970 AFL-NFL merger to hold their opponents scoreless in the first quarter through their first seven games to begin a season.

"They'll pretty much dictate the tempo of the game," says McGinest. "So when you have teams or defenses that are great on every single level and they can do a lot of different things and you have players that are interchangeable, it makes for a dangerous defense."

The most consecutive games without allowing a first-quarter point to begin a season since 1970:

NFL teams are a combined 670-358-2 (.651) when allowing zero points in first quarter since the start of the 2010 season, demonstrating the impact a defense can have on the game by setting the tone early.

Over the past five seasons (since 2010), the Broncos have held their opponents scoreless in the first quarter in 40 games, tied for the second-most such games during that span, and posted a 33-7 (.825) record in those contests.

The teams with the most games allowing no points in the first quarter since 2010: