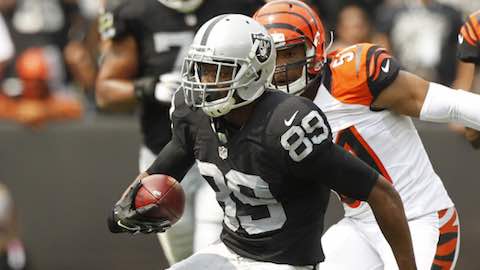 Making the transition from college to pro can be challenging, but year after year, rookies across the NFL emerge as key players. In the AFC, this season's rookie contributions have come in all three phases of the game.

Despite missing two starts due to injury, Tennessee's MARCUS MARIOTA had 13 touchdown passes in the first half of the season, which is the most of any rookie through his team's first eight games in NFL history.

On the defensive side of the ball, rookie cornerback RONALD DARBY of Buffalo leads all NFL players with 18 passes defensed and MARCUS PETERS of Kansas City is tied for third in the league with four interceptions.

Through nine games, Cooper has already set franchise rookie records for receptions (50) and receiving yards (732). He has started eight of nine games and recorded at least four catches and 40 yards in every contest this season.

"He's just a tireless worker -- someone who runs great routes, very quick, very sudden," says Oakland quarterback DEREK CARR. "It's hard for people to guard him and just match him with such speed and quickness. That's not a discredit to anyone. That's just a credit to him and how quick he is. Guys just have to play him a little different."

Darby, who has started all nine games at cornerback for the Bills, leads the NFL with 18 passes defensed. His two interceptions are tied for the team lead, and he ranks fourth among Bills players with 47 tackles.

"To play corner in this league, there's a certain thing you have to have, and he has it," says Buffalo head coach REX RYAN. "He can't wait to get out there, challenge himself and compete. It's something he looks forward to. He loves to play."

Darr's league-leading 49.1 punting average is on pace to eclipse the single-season NFL rookie record of 47.8, which was set in 2012 by Jacksonville's BRYAN ANGER.

"From when we watched him on college tape and then when I went there and worked him out, I saw the talent there for sure," says Miami's assistant head coach/special teams coordinator DARREN RIZZI. "He kind of just started punting well right away. The crazy part about it is we still think he's got a higher ceiling."

Johnson has been a versatile contributor for the Browns and ranks second in catches (39) and third in receiving yards (387) amongst AFC running backs this season. He has also rushed for 189 yards.

"Duke is a guy who has showed he can do some damage with the football," says Cleveland head coach MIKE PETTINE. "I think that is on us as a staff to find more creative ways to get him the football, whether that is in the run game or whether that's in the pass game. He is showing to be the guy we thought he was."

Gordon ranks second in the AFC and third amongst NFL rookies with 413 rushing yards this season.

Lambo, who leads NFL rookies with 68 total points this season, has converted 17 of 19 field-goal attempts and 17 of 20 PATs. He kicked a career-best three field goals with no misses against Cleveland in Week 4, including the game-winning 34-yarder as time expired.

"He stepped up big," said Chargers quarterback PHILIP RIVERS after Lambo's game-winning kick against the Browns. "He had the other two besides the game-winner early in the game that were big. I know that will be big for his confidence, too."

"He is a real tough kid and we respect him," says Tennessee tight end ANTHONY FASANO, who was on the receiving end of a game-winning five-yard touchdown pass from Mariota in overtime at New Orleans in Week 9. "He's one of the younger guys but he is still one of our leaders."

Peters has started all nine games for the Chiefs this season, posting 40 tackles and a team-high four interceptions. His four INTs lead all rookies and are tied for third in the NFL, while his 13 passes defensed are second among rookies and tied for fifth in the league.

"I love his tenacity," says Kansas City head coach ANDY REID. "You have to have a short memory when you play out on the corner. He's going to challenge you and if you're going to be a great corner in this league you have to have that mindset. So he's wired the right way."

Despite missing three games due to injury, Williams has impressed as a runner and receiver in his first season, totaling 432 scrimmage yards (360 rushing, 72 receiving) and seven total touchdowns (five rushing, two receiving) in six games. Williams, whose seven touchdowns are the most among this year's rookie class, is one of two rookies in NFL history to score at least one touchdown in each of his first six career games (ROBERT EDWARDS, 1998).

"He's obviously got a lot of special qualities about him," says Rex Ryan. "But No. 1, he's an explosive athlete who has size, speed, vision and burst. He's got all of that. You don't luck into six straight games with a touchdown. This guy has got receiving skills. He's got a couple of touchdowns out of the backfield, but he just blows by guys. He sets them up."

Yeldon has started all eight games in which he's played for Jacksonville and leads AFC rookies with 531 rushing yards. He's been a steady contributor this season, posting at least 60 scrimmage yards in seven of his eight games, including three 100-yard performances.

"He's a guy that's been able to handle the load," says Jacksonville offensive coordinator GREG OLSON. "He's proved that he can handle the responsibility, and he's done well."