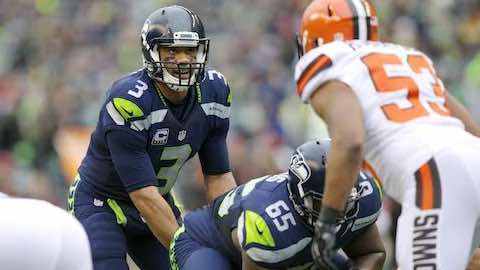 QB Russell Wilson, who leads the NFL with a 111.4 passer rating, earned the third Pro Bowl selection of his four-year career Tuesday, leading a parade of seven Seahawks selected for the NFC-AFC All-Star game in Honolulu Jan. 31. Notably snubbed: WR Doug Baldwin, who is tied for the NFL lead in TD catches with 13, including 10 in his past four games.

This is the fifth consecutive season that Seattle has had at least five representatives in the Pro Bowl and it ties the franchise record with seven selections (also 1984, 2005).

Wilson is the first player in NFL history to throw at least three touchdowns with no interceptions in five consecutive games.

Bennett’s selection is his first. He is tied for third in the NFC (T-10 NFL) with a career-high 9.5 sacks, including a team-leading 25 quarterback hits (7th NFL) and 49 tackles (31 solo) among defensive linemen.

Wagner is second on the Seahawks with 101 tackles (56 solo) and is the second player in franchise history (Terry Beeson, 1977-80) to record four consecutive 100-tackle seasons. Wagner is a Pro Bowler for the second time.

Thomas ranks fourth on the Seahawks with 59 tackles (41 solo) and leads the club with four interceptions. His 20 career interceptions rank tied for seventh in franchise history. This is his fifth Pro Bowl selection.

Chancellor, who sat out the first two games in a contract dispute, ranks third on the Seahawks with 74 tackles. This is his fourth Pro Bowl selection.

Sherman has two interceptions this season and, since 2011, his 26 picks and 81 passes defensed lead the NFL. Sherman’s 26 INTs rank tied for sixth in NFL history in a player’s first five seasons. He also leads the team with 13 passes defensed. This is Sherman’s third Pro Bowl selection in five seasons.