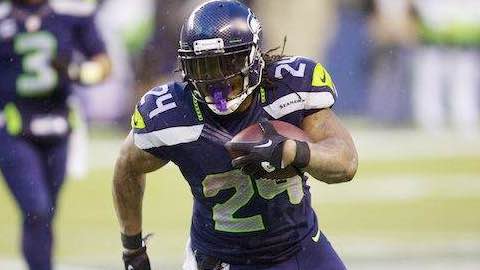 Marshawn Lynch practiced with the Seahawks at the team’s facility. After practice, he gave ESPN’s Chris Berman his practice jersey. The significance of both events remains a mystery. But they did happen.

After what happened last week, we hesitate to determine any significance beyond those facts.

Even coach Pete Carroll thought he knew what was going on with his star running back. He didn’t.

Carroll, you may recall, said on his radio show that he was sure Lynch was going to play. By that afternoon, the plane left for Minnesota without him. Carroll said Lynch told trainers he wasn’t ready to play.

WR Doug Baldwin, and apparently other teammates, knew that Lynch hadn’t recovered sufficiently from his Nov. 25 abdomen surgery to play.

“Not surprised,” Baldwin said before practice. “He told us. I talked to him. He said he had to run on morning with the trainers to see if he could deal with it.”

Apparently, he couldn’t. But Carroll’s confusion, and a contradictory comment from Lynch’s agent, Doug Hendrickson, that Lynch had a physical setback, has set tongues wagging among Seahawks-watchers as to whether Lynch’s sit-out had some other agenda, such as contractual unhappiness.

Baldwin was quick to defend Lynch.

“I think (media) are just trying to make a narrative,” he said. “Marshawn has been a leader in our locker room and the engine of our offense for years now. He wasn’t feeling right, he wasn’t 100 percent to go. Best thing to do was for him to stay back and get more treatment.

“I think you guys are making more out of it than it really is.”

Ahead of practice, Carroll said, "Yes, he's going. I think he's got it. We're going to go day to day. I can feel it. He's encouraged to go for it again."

After the past week, no one is taking strictly the word of Carroll, who sounds as if he has little, if any, direct contact with Lynch.

But in their first playoff game without him since his 2010 arrival, the Seahawks survived by the minimum margin, 10-9, in Minnesota. It was hard to separate what was weak football and what was a lock-up caused by subzero weather.

As RB Christine Michael put it, “That was the hardest thing I’ve ever done.”

Michael managed 70 yards in 21 carries and had no fumbles. But he missed some open holes. There’s little doubt Lynch would have given the Seahawks more production.

“For him to be back would be huge for us,” Baldwin said. “Not only for (rushing) but for the morale in the huddle. But Marshawn is dealing with a very serious injury. He has to heal up. We’re not pushing him. We’ll talk to him, as we always do.

If he can’t go again, we got guys who are more than capable of carrying the load. We’re ready to go.”

"He looks good,” he said. “I can't judge each day, but probably one of the best days that he's had out here today. He's in there, he's moving around, he's making more cuts, probably a little bit more tempo to it as well.”

He admitted he he was surprised by Lynch’s absence.

“Probably,” he said. “He practiced the whole week. Only Marshawn knows how he's feeling. It's something that we can't determine.

“He has to feel very confident that he's going to be able to go out and do it. We don't just want him to go in, have a couple plays and be done.”

If ever there were a game that needed Lynch, it is against Carolina’s front seven, perhaps the best in the NFL.

As one special-teams warrior to another, Seahawks punter/placekick-holder Jon Ryan had to put in a word for his beleaguered colleague, Vikings placekicker Blair Walsh, who missed the game-winning field goal that preserved the Seahawks season.

“What Walsh had done up to that point — he was the best player on the field,” Ryan said.

“He’s kicking off to touchbacks, he hits three field goals, one from 47. I was so impressed.”

Ryan’s admiration grew in part because the Seahawks in the week before the game tried to simulate the conditions by putting footballs in the practice facility’s freezer.

“There were no problems on the hold, but on the punts, the ball just wouldn’t fly,” he said. “They inflate the balls in a controlled, 70-degree environment to 13 (pounds per square inch). We experimented last week, taking a ball down to minus-10. The PSI is 8.4. So you’re kicking a completely frozen, flat football.”

Ryan had his own mishap when, on his first punt of the day, a low ball from snapper Clint Gresham made him decide to run. It worked for four yards until he attempted to vault tacklers and landed facemask-first, breaking his nose. The mistake set up the Vikings’ first field goal.

There was some concern Ryan wouldn’t be able to return to the game.

“My vision was little blurry because my nose was so fat at the time,” he said. “There was so much blood . . . everything was a little blurry.

“It didn’t hurt at all when it happened. During the game, I sucked it up and played with a crooked nose. I worried my ass off the whole game that my modeling career was over. But luckily, the dream continues.”

After the game, he was X-rayed and the nose pushed back in place. He’s ready to go. But he’s dismayed with some of the criticism that he missed a hole on the left side of the line that may have allowed him to get a first down.

“I had questions from Monday-morning quarterbacks saying you shoulda went left,” he said. “This isn’t a Madden (video game). I couldn’t just hit L2 and go left. I’m a 34-year-old white guy. I was trying to get off the field. You never second-guess your instincts.”

Fortunately, Ryan’s perspective, if not his pride, had no injury.

Carolina and Seattle will meet in the postseason for the third time. The Seahawks have won both meetings, including last year's Divisional Playoff 31-17 in Seattle. The teams met earlier this season in Week 6 and the Panthers scored two late touchdowns to pull out a 27-23 come-from-behind victory.

The Seahawks improved to 6-1 in the postseason over the past three seasons under head coach PETE CARROLL with a 10-9 win at Minnesota last week. Seattle, which is the second team in NFL history to lead the league in fewest points allowed in four consecutive seasons (Cleveland, 1953-57), has won six consecutive road games and allowed just one offensive touchdown.

"We realize we've got to do this on the road and if we want to do something really special, it's going to take an incredible run here," says Carroll. "So we're just getting ready for Carolina and we're going to do everything we can to see if we can slow them down and find a way to move the football against a great football team. We're going to have to play great football."