NFL Championship Weekend: What to Look For 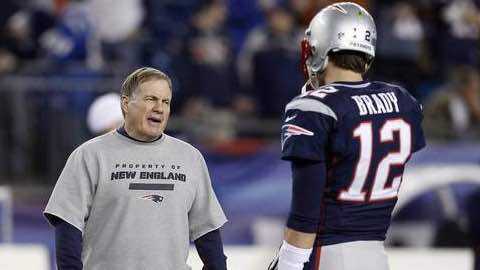 NFL Championship Weekend: What to Look For

The NFC's No. 2 seed ARIZONA (14-3) will travel this Sunday to play No. 1 seed CAROLINA (16-1). The Panthers had seven games this season that finished within seven points or fewer, while the Cardinals had five such games.

The past eight NFC Championship Games have been decided by seven points or fewer:

The defending Super Bowl-champion NEW ENGLAND PATRIOTS (13-4) defeated Kansas City 27-20 last week in the Divisional Round. With a win Sunday against Denver, the Patriots can become the 13th team in NFL history to reach the Super Bowl after winning it the previous season.

Eight Super Bowl winners won the title game the next year and four lost it.

The teams to reach the Super Bowl after winning it the previous season:

With a win against Denver on Sunday, New England (eight) can surpass Dallas (eight) and Pittsburgh (eight) for the most Super Bowl berths in NFL history.

Denver (seven) can tie New England, Dallas and Denver for the most Super Bowl berths with a win on Sunday.

The teams with the most Super Bowl appearances:

The CAROLINA PANTHERS, who went 15-1 en route to the NFC South division title and the conference's top seed, host Arizona on Sunday in the NFC Championship Game.

With a win on Sunday, the Panthers will become the ninth team in NFL history to lose one or fewer regular season games and advance to the Super Bowl.

The teams with one or fewer regular season losses to reach the Super Bowl:

New England head coach BILL BELICHICK and quarterback TOM BRADY have made six Super Bowl appearances together, the most appearances by any head coach-quarterback combination in NFL history.

With a win Sunday against the Broncos, the Patriots can extend their NFL record for the most such Super Bowl appearances.

The head coach - quarterback combinations with the most Super Bowl appearances in NFL history:

With a win, Belichick (six) would surpass Pro Football Hall of Famer DON SHULA (six) as the only head coach to lead their team(s) to seven Super Bowls.

The head coaches to reach the most Super Bowls:

The players with the most postseason games played in NFL history:

Palmer, who won the Heisman Trophy in 2002 at the University of Southern California, and Newton, who won the award in 2010 at Auburn, will become the first pair of Heisman Trophy winning quarterbacks in NFL history to start against each other in the playoffs.

The LAMAR HUNT TROPHY will be presented to the winner of the AFC Championship Game.

The late Hunt, founder of the Kansas City Chiefs and American Football League, helped professional football attain its stature as America's No. 1 sport. In the 10-year history of the AFL, his team posted the most wins (87) and earned berths in two of the first four Super Bowls, including a victory in Super Bowl IV.

In 1972, Hunt became the first person from the AFL to be enshrined in the Pro Football Hall of Fame.

The winner of the NFC Championship Game will be presented with the GEORGE HALAS TROPHY.

Halas, the late owner of the Chicago Bears and a founder of the NFL, is the second-winningest coach in history (324-151-31) behind DON SHULA (347-173-6). He won six NFL championships with the Bears and is a charter enshrinee of the Pro Football Hall of Fame (1963).

NFL Football: "NFL Championship Weekend: What to Look For"