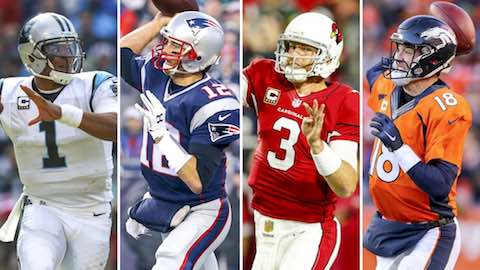 "There are only four teams playing next week and we're one of them," says New England quarterback TOM BRADY. "The Championship Game means a lot."

Championship Sunday begins with the AFC title game between the Denver Broncos and New England Patriots in a rematch of a Week 12 overtime thriller won by Denver 30-24. The Broncos defeated Pittsburgh 23-16 in the Divisional round while New England won against Kansas City 27-20.

The NFC Championship Game features the Arizona Cardinals and Carolina Panthers, the first meeting between the two teams since the Panthers defeated the Cardinals in the last year's Wild Card Playoff round. In the Divisional Playoffs, the Cardinals knocked off the Packers 26-20 in OT while the Panthers held on to beat the Seahawks 31-24.

With each of the four remaining playoff teams looking to capitalize on the momentum built this past weekend in hopes of advancing to Super Bowl 50, they'll have their work cut out for them on Championship Weekend.

The Patriots and Broncos meet in the NFL postseason for the fifth time, with Denver holding a 3-1 all-time advantage, including the teams' most recent postseason meeting in the AFC Championship Game during the 2013 season. The teams met earlier this season in Week 12, as Denver overcame a 14-point fourth-quarter deficit to earn a 30-24 overtime victory and hand New England its first loss of the season.

The Patriots, the defending Super Bowl champions, advanced to their fifth consecutive AFC Championship Game with a 27-20 win over Kansas City last week at Gillette Stadium. New England joins the 1973-77 Oakland Raiders as the only teams in the Super Bowl era to reach five Conference Championship Games in a row.

New England head coach BILL BELICHICK, who has an NFL record 23 playoff victories, will coach in his 10th Conference Championship Game, tying Pro Football Hall of Famer TOM LANDRY for the most in the Super Bowl era. The Patriots are 6-3 in AFC Championship Games under Belichick.

"It's great to move on to the AFC Championship Game," says Belichick. "It's always an honor to be part of that game. We're excited about that."

In his first year as head coach of the Broncos, head coach GARY KUBIAK guided the team to a 12-4 mark and the conference's top seed. This week, Kubiak will attempt to become the first head coach to earn a Super Bowl berth in his first season with a team since JIM CALDWELL accomplished the feat with Manning and the Indianapolis Colts in 2009.

"There hasn't been one way that we've won," says Kubiak. "We've kind of won all kinds of different ways. We've had a lot of different players contribute to our success when we've been successful."

The game will mark the 17th meeting in the historic rivalry between Manning and Brady. The two quarterbacks have represented the AFC in nine of the past 14 Super Bowls, earning Super Bowl MVP honors in four of those contests.

"I wouldn't want it any other way," says Pro Bowl linebacker VON MILLER about facing the Patriots. "They're one of the best teams in the AFC. Let's go out and play and see who wants to go to the Super Bowl. "

The Cardinals and Panthers will meet in the postseason for a third time, as the postseason series between them is tied (1-1). The Cardinals won the teams' first postseason meeting in 2008, a 33-13 Divisional Playoff victory in Charlotte en route to an eventual berth in Super Bowl XLIII. The Panthers won the last meeting, a 27-16 game in the Wild Card round last season.

The Cardinals advanced to the NFC Championship Game for the first time since 2008 and the second time during the Super Bowl era. In the Divisional Playoff last week, Arizona defeated Green Bay 26-20 in overtime.

"Sometimes you've got to play harder for more than 60 minutes," says Cardinals head coach BRUCE ARIANS about Arizona's Divisional victory. "I can't be prouder of our guys. We get to practice again this week and play another game."

Cardinals Pro Bowl wide receiver LARRY FITZGERALD had eight catches for 176 yards and the game-winning overtime touchdown against Green Bay. Fitzgerald, who set up the game-winning score with a 75-yard reception, has 53 catches for 912 yards (114 per game) and 10 touchdowns in eight career postseason games. Fitzgerald's 10 touchdown receptions in the playoffs are tied for the third-most in NFL history, trailing only Pro Football Hall of Famers JERRY RICE (22) and JOHN STALLWORTH (12). Fitzgerald is the fastest player in NFL history (eight games) to reach 10 postseason touchdown receptions.

"It was a great game," says Fitzgerald, who now has three career postseason games with at least 150 receiving yards, the most such games by any player during the Super Bowl era. "It was a playoff atmosphere and that's what you're looking for."

Arizona Pro Bowl quarterback CARSON PALMER, who has won 27 of his past 32 starts, registered his first career postseason win last week. Against the Packers, Palmer passed for 349 yards and three touchdowns, including two to wide receiver MICHAEL FLOYD. Palmer set club records this season with 4,671 passing yards, 35 touchdown passes and a 104.6 passer rating.

"They say to get something that you've never had, you have to do something you've never done," says Carolina Pro Bowl quarterback CAM NEWTON, who is the only player in NFL history with 30 touchdown passes (35) and 10 rushing TDs (10) in a season. "For us, we've never had that vibe in the streets of Charlotte and I expect nothing less than what we saw on Sunday."

"They are a well-coached football team with a dynamic quarterback," says Panthers head coach RON RIVERA about the Cardinals. "They've got some playmakers and then they have an aggressive defense. This is a complete team that we will play as well and we have to be on our game."