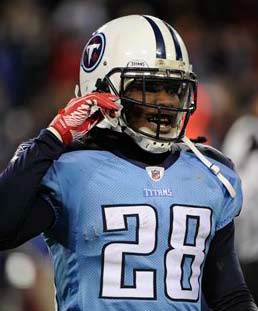 A dynamic running back with breakaway speed, Tennessee Titans running back CHRIS JOHNSON has enjoyed one of the most prolific starts to a career in NFL history. The Pro Bowl running back has rushed for 4,598 yards, the third-most of any player through his first three seasons.

"Anything you can say about a top running back in the league, he has it, all of the attributes and more," says Jacksonville Jaguars linebacker KIRK MORRISON.

"You see a lot of running backs that always have their heads down and running extremely hard with determination and grit, but yet when you see him, it's almost effortless. Seeing his speed on the field, there is not one person in this league that can run as fast as Chris Johnson. He also has some strength that nobody really knows about. He can run you over."

"He's a huge threat at any point in time," says Indianapolis Colts head coach JIM CALDWELL. "He might run for five or six yards here and there and then all of a sudden he hits you with a 70-yarder. He's dangerous, not only from running it from scrimmage out of the backfield, but also screen passes and things of that nature. He can catch, he can run, he's very, very dangerous when he gets a seam."