NFL QBs Not Only Getting Younger, They’re Also Winning 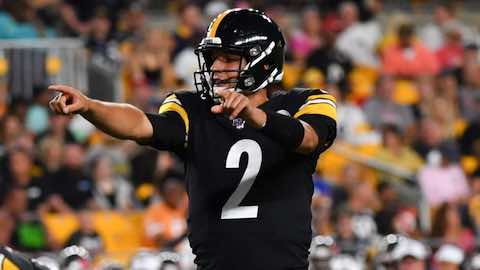 In fact, 11 of the 15 winning NFL teams this past week had a starting field general who has yet to see his 27th birthday. The Steelers' victory marked the 39th win by a starting quarterback age 26-or-younger this season.

This week, at least four games match up youthful quarterbacks. Minshew's Jaguars travel to Carolina to play Allen (1:00 PM ET, CBS), Winston and the Buccaneers are at New Orleans to play Bridgewater (1:00 PM ET, FOX), and one of the New York Jets' young starters, either SAM DARNOLD or LUKE FALK, will be in Philadelphia to meet CARSON WENTZ (1:00 PM ET, CBS), and Rudolph's Steelers host Baltimore and LAMAR JACKSON (1:00 PM ET, CBS).

Pittsburgh quarterback MASON RUDOLPH completed 24 of 28 pass attempts (85.7 percent) for 229 yards with two touchdowns and a 124.6 passer rating in Week 4 to earn his first career victory as a starter. It also marked Rudolph’s third consecutive game with two touchdown passes.

Two weeks can mean a night-and-day difference in the National Football League.

Exhibit A is the AFC North, where the CLEVELAND BROWNS and PITTSBURGH STEELERS two weeks ago were near the bottom looking up. This week, the Browns are in first place and the Steelers are just a game out with a prime opportunity to gain important ground at home against Baltimore.

Like the Browns and Steelers, the SAN FRANCISCO 49ERS and GREEN BAY PACKERS didn't qualify for the 2018 playoffs. However, each of those NFC teams begin Week 5 in first place preparing for a division leader on the opposite sideline. Cleveland is one of 14 teams standing at either 2-2 or 2-1-1 entering Week 5

The captain has turned on the fasten-seatbelt sign. The NFL enters October with a lot left to be determined in an already exciting 100th season.

That contest (1:00 PM ET, FOX) marks the first NFL game at Tottenham Hotspur Stadium. The new facility will become the 187th venue to host a regular-season or postseason game in the 100 years of the National Football League.

This week marks the Raiders' third appearance as a regular-season home team in London. It's the fourth straight season and the fifth time in six years that the Raiders have hosted a regular-season game internationally, having played at Wembley Stadium in 2014 and 2018 as well as games at Mexico City's Estadio Azteca in 2016 and 2017.

The Bears also have played in the United Kingdom twice before, both at Wembley Stadium (preseason in 1986 and regular season in 2011).

The NFL and Tottenham Hotspur have an agreement for a minimum of two games per year to be played through 2028. The state-of-the-art stadium features a retractable-grass field with an artificial surface underneath that will be used for NFL games. It also has customized NFL features, such as purpose-built locker rooms, medical and media facilities and a dedicated entrance.

By the end of the 2019 season, the NFL will have played 28 regular-season games in London, with 31 of 32 teams having participated. The Green Bay Packers are the only team that has yet to play there.

Since 2007, when the NFL played its first regular-season game in the United Kingdom, the league has been remarkably pleased with the passion and knowledge of the UK fans as well as the resulting growth in the NFL's international popularity. For the teams, traveling to London is a unique road trip, allowing the coaches and players to spend more time together than they would for a domestic trip. And when those teams return from either London or Mexico City with a win, those wins have proven significant.

No Such Thing As A Safe Lead in the NFL

Three teams, all of which were on the road, erased deficits of at least 10 points last week to register important wins. Both the PHILADELPHIA EAGLES and KANSAS CITY CHIEFS came back from 10 down to win gritty games at Green Bay and Detroit, respectively. Meanwhile, the JACKSONVILLE JAGUARS, behind rookie quarterback GARDNER MINSHEW, climbed over a 17-3 obstacle at Denver to win a thriller, 26-24.

Turnovers in the NFL at Record Lows

The TENNESSEE TITANS have committed one turnover, fewest in the NFL through four weeks. One of the more interesting aspects of the NFL's current era that separates it from previous periods is that teams are turning over the ball less frequently.

The amount of interceptions and fumbles lost has decreased dramatically in recent years. In each of the last three seasons (2017-19), the NFL through four weeks of play has reached some of its lowest marks in the turnover category since the 1970 AFL-NFL league merger.

Lamar Jackson Not Your Average QB

Tampa Bay linebacker Shaquil Barrett leads the NFL with nine sacks through four weeks in 2019. Barrett, who notched one sack in Week 1, three sacks in Week 2 and four sacks in Week 3, added yet another sack to his total, as well as an interception and a forced fumble, in the Buccaneers’ Week 4 win.

With one sack on Sunday at New Orleans (1:00 PM ET, FOX), Barrett would join Pro Football Hall of Famer KEVIN GREENE (1998) as the only players to reach 10 sacks in their team’s first five games of a season since 1982 when the individual sack became an official statistic.

New England defensive back DEVIN McCOURTY leads the NFL with four interceptions this season, having recorded one interception in each of the Patriots’ first four games of 2019.

With an interception on Sunday at Washington (1:00 PM ET, CBS), McCourty would become the third player in the Super Bowl era to record at least one interception in his each of his team’s first five games of a season.