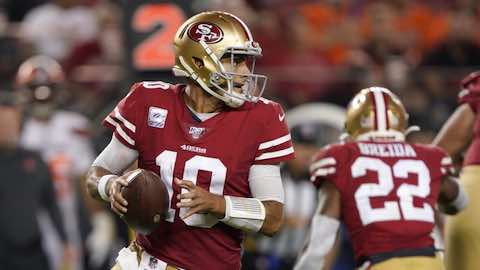 Through Week 5, the 2019 NFL season has tied for the most games decided by seven points or fewer in NFL history.

Forty-two of 78 overall games (53.8 percent) have been decided by seven-or-fewer points, including nine of 15 games in Week 5. Expect more to come in Week 6.

This week, several NFL teams are on the road with the opportunity to improve key tiebreakers, their interdivision and interconference records.

Odds of Making the Playoffs

If history is any indication, emerging at .500 or better through six games has positive playoff implications.

There's always hope, proven by the 2004 GREEN BAY PACKERS, who started 1-4 and won nine of their last 11 to capture their division title. In fact, since that season, the MIAMI DOLPHINS in both 2008 and 2016, the DENVER BRONCOS in 2011 and three teams in 2015 -- the HOUSTON TEXANS, SEATTLE SEAHAWKS and WASHINGTON REDSKINS -- made the playoffs after opening 2-4.

A closer look at six-game records and how they affect playoff chances:

Since 1990, when the NFL adopted the 12-team playoff format, 81 of 98 teams (82.7 percent) to win five of their first six games have qualified for the postseason.

Since 1990, when the NFL adopted the 12-team playoff format, 78 of 216 teams (36.1 percent) to win three of their first six games have qualified for the postseason.

Since 1978, when NFL teams began playing 16-game schedules, and excluding the abbreviated season of 1982, 108 of 297 teams (36.4 percent) to win three of their first six advanced to the postseason.

For the first time since 1984, the San Francisco 49ers are the NFC's lone undefeated team through Week 5.

Behind quarterback Jimmy Garoppolo, who owns a 10-2 career record as the 49ers' starting quarterback, San Francisco is off to its best start since opening 10-0 in 1990.

Entering Week 6 of the NFL's 100th season, all four teams in the NFC North have winning records.

This year, the Green Bay Packers (4-1) sit atop the NFC North with the Detroit Lions (2-1-1), Minnesota Vikings (3-2) and Chicago Bears (3-2) closely behind. That division has crowned three different teams as its winner over the past three seasons. No other NFL division has that distinction.

And if the Lions and Vikings win this week, with the Bears on their bye, the NFC North could have four teams above .500 again next week.

Physically and mentally, a touchdown drive of 90-or-more yards can provide a substantial advantage.

Last week, the OAKLAND RAIDERS engineered not one but two such drives in a London win over the Bears. The MINNESOTA VIKINGS orchestrated a 98-yard touchdown drive in a victory at the New York Giants.

Sacks Are Piling Up

Through Week 5, that's the second-highest total over the last two decades. In that span, only the 2013 season (416) had more entering Week 6.

Waking Up to NFL Football

The second of five international games appears on the Week 6 slate.

The CAROLINA PANTHERS meet the TAMPA BAY BUCCANEERS in an important NFC South clash. The contest kicks off at 9:30 AM ET and will appear exclusively on NFL Network. It's also the second of two games at London's Tottenham Hotspur Stadium. In Week 8, the NFL plays its first of two games at London's Wembley Stadium, when the CINCINNATI BENGALS meet the LOS ANGELES RAMS. In Week 9, also at Wembley, the HOUSTON TEXANS play the JACKSONVILLE JAGUARS. The 2019 international games conclude with a Week 11 game in Mexico City, where the KANSAS CITY CHIEFS play the LOS ANGELES CHARGERS on Monday Night Football, November 18.

The Future is Here

This Sunday, Kansas City quarterback PATRICK MAHOMES and Houston quarterback DESHAUN WATSON face each other for the first time in their careers, when the Chiefs welcome the Texans to Arrowhead Stadium (1:00 PM ET, CBS).

Detroit Lions quarterback MATTHEW STAFFORD enters Week 6 with 39,648 career passing yards in 145 games during his 11-year career with the Lions. ​

With 352 passing yards against the Packers on Monday Night Football (8:15 PM ET, ESPN), Stafford can become the first player in NFL history to reach 40,000 career passing yards in fewer than 150 games.

Seattle Sehawks quarterback RUSSELL WILSON passed for 268 yards and four touchdowns with a 151.8 passer rating in the Seahawks' Week 5 win. Wilson, who currently leads the NFL with a 126.3 passer rating in 2019, has a passer rating of 100 or higher in each of Seattle's first five games of the season.

San Francisco 49ers quarterback Jimmy Garoppolo has 920 passing yards and seven touchdowns with a 99.4 passer rating in 2019 and has led the 49ers to their first 4-0 start since 1990. Garoppolo now owns a 12-2 record as a starting quarterback in the NFL.

With a win on Sunday at the Los Angeles Rams (4:05 PM ET, FOX), Garoppolo can become the eighth quarterback in the Super Bowl era with at least 13 wins in his first 15 career starts.

Carolina Panthers running back Christian McCaffrey had a season-high 237 scrimmage yards (176 rushing, 61 receiving) and three touchdowns (two rushing, one receiving) in Week 5 and leads the NFL in scrimmage yards through the first five weeks of the 2019 season (866).

With 134 scrimmage yards in London against Tampa Bay (9:30 AM ET, NFL Network), McCaffrey would join Pro Football Hall of Famers JIM BROWN (1963) and MARSHALL FAULK (2000) as the only players in NFL history with at least 1,000 scrimmage yards through their team's first six games of a season.

Thursday's Giants-Patriots matchup as the Game of the Week because the game was a rematch of two of the most exciting Super Bowls in history.

In 2007, the New England Patriots completed the first undefeated regular season since the 1972 Dolphins. Entering Super Bowl XLII in Glendale, Ariz., with an 18-0 record (including playoffs), New England took a 7-3 lead into the final quarter, setting the stage for a Super Bowl-record three fourth-quarter lead changes. ELI MANNING gave the NFC Wild Card Giants their first lead with a 5-yard touchdown pass to DAVID TYREE. TOM BRADY answered with a 6-yard scoring toss to Pro Football Hall of Famer RANDY MOSS, just prior to one of the greatest plays in NFL annals. On third-and-5 from his own 44, with 1:15 on the clock, Manning managed to elude pressure and secure the ball -- thanks in part to the late JARED LORENZEN, who Manning credited with emphasizing ball security during a daily practice drill. Then, Tyree made a 32-yard catch for the ages, pinning the ball against his helmet, to help set up Manning's game-winning 13-yard touchdown pass to PLAXICO BURRESS with 35 seconds remaining, as the Giants prevailed, 17-14.

Four years later in Indianapolis, the teams met in Super Bowl XLVI. Again, Eli Manning led the Giants from behind, this time orchestrating a pair of third-quarter field-goal drives to chip away at a 17-9 deficit. Then, as the Giants held the Patriots scoreless over their final four drives -- including a clutch stop to end the game -- Manning engineered a nine-play, 88-yard march ending in AHMAD BRADSHAW's 6-yard touchdown run with 57 seconds remaining, the game-winning score and a 21-17 lead.

As he did in the first Super Bowl against New England, Manning captured game MVP honors.