Quarterbacks of the Future 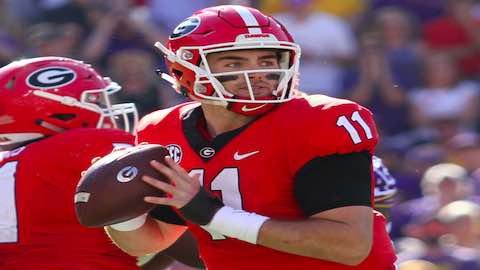 NFL team success often hinges on the production at the quarterback position.

Pro Football Hall of Famer GIL BRANDT, who oversaw the Dallas Cowboys’ personnel department for 29 years and currently shares his gridiron knowledge as a senior analyst for NFL.com, sees plenty of quarterback talent coming down the pike.

Gil Brandt’s choices for the top quarterbacks to watch in college football this season (listed alphabetically):

"He started as a freshman and has started the past 28 games. In 2018, he completed 67 percent of his passes with 30 touchdowns and six interceptions. Very good arm strength with good accuracy. Not flashy, just a winner: 24 wins over two years."

"He started seven games as a true freshman in 2016. In 2017, in the eight games he started, the team averaged 52 points. He completed 59 percent of his passes in 2018 with 29 touchdowns and eight interceptions. Very athletic with very good feet, strong arm, smart."

"He led team to the national championship as a starting quarterback as a freshman. He was 52-2 as a starter in high school and won two state championships. He had 30 touchdown passes, had four interceptions in 2018 and had 347 yards passing versus Alabama in the National Championship. Mobile with a strong arm."

Now, he’s a true junior, left-handed. He came in for the second half vs. Georgia in 2017 and passed for a game-winning touchdown. Last year, he completed 69 percent of his passes for 3,966 yards with 43 touchdowns and six interceptions on 355 attempts. Very mobile with good accuracy and arm strength. Makes plays with his feet."

Additional College quarterbacks Brandt will be keeping tabs on

Quarterbacks of the Future - NFL 100