Young NFL Quarterbacks on the Rise 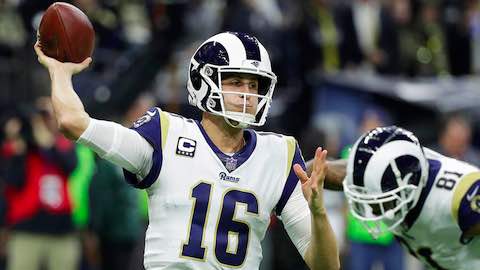 As veteran NFL quarterbacks continue to climb the record books, young stars are emerging at the quarterback position around the NFL. Below is a sampling of statistical highlights from several of the league's top young passers.

Los Angeles Rams quarterback Jared Goff became the first No. 1 overall draft pick to lead his team to the Super Bowl within his first three seasons in NFL history.

In Week 4 vs. Minnesota, Goff finished with a 158.3 passer rating (the highest attainable mark) after completing 26 of 33 passes (78.7 percent) for 465 yards, five touchdowns and zero interceptions.

Jared Goff became just the fifth quarterback in NFL history and first since BEN ROETHLISBERGER in 2014 to throw for at least 450 yards, five touchdowns and zero interceptions in a single game.

Last season, Dallas Cowboys quarterback Dak Prescott led the Cowboys to their second NFC East division title in the past three seasons after passing for a career-high 3,885 yards and 22 touchdowns. Prescott has recorded 13 games with at least one passing touchdown and one rushing touchdown, the second most in a player's first three seasons in NFL history (CAM NEWTON, 20).

Chicago Bears quarterback Mitchell Trubisky became the sixth quarterback in franchise history to throw for at least 3,000 yards in a single season after passing for 3,223 yards and 24 touchdowns, while leading Chicago to its first NFC North division title since 2010. Trubisky tied a franchise record by tallying four games with at least 300 yards passing in 2018 and became the first Bears quarterback to record four games with a passer rating of 120 or higher in a single season.

Watson became the first quarterback in NFL history to throw for at least 375 yards and rush for 30 yards in back-to-back games, accomplishing the feat in three consecutive games from Weeks 2-4 in 2018.

Philadelphia Eagles quarterback Carson Wentz set a franchise record and ranked third in the NFL in completion percentage (69.6) and fourth in the NFC with a 102.2 passer rating in 2018. Wentz joined PEYTON MANNING as the only quarterbacks to record four consecutive games with a passer rating of 115 or higher with at least 30 pass attempts in a single season in NFL history.

The 2018 class of rookie quarterbacks proved to be one of the best in NFL history.

BAKER MAYFIELD, the No. 1 overall selection in the 2018 NFL Draft, threw for 27 touchdown passes in 2018, the most by a rookie quarterback in league annals He also threw a touchdown pass in all 13 of his starts, joining BRAD JOHNSON and Pro Football Hall of Famer KURT WARNER as the only quarterbacks in the Super Bowl era to throw a touchdown pass in each of their first 10 career starts.

SAM DARNOLD, the No. 3 overall selection in 2018, became the youngest quarterback to start a season-opening game in the Super Bowl era.

LAMAR JACKSON started the Ravens' final seven games in 2018 and led Baltimore to a 6-1 record down the stretch. In his first two NFL starts, Jackson rushed for 190 yards, the most by a quarterback in his first two career starts in the Super Bowl era. The first-rounder was the only rookie quarterback to lead his team to the playoffs in 2018.

In his seven total starts last season, Jackson averaged 79.4 rushing yards per game, the most by a rookie starting quarterback in the Super Bowl era (minimum five starts).

JOSH ALLEN, who started 12 games last season, averaged 55.0 rushing yards per game as a starter. Allen finished last season with 18 total touchdowns (10 passing, eight rushing), the most by a rookie quarterback in Bills franchise history. His eight rushing touchdowns were the second most by a rookie quarterback in the Super Bowl era, trailing only CAM NEWTON (14 in 2011).

Three quarterbacks -- Oklahoma's KYLER MURRAY (No. 1 overall, Arizona), Duke's DANIEL JONES (No. 6, New York Giants) and Ohio State's DWAYNE HASKINS (No. 15, Washington) -- were selected in the first round of the 2019 NFL Draft.

Last season, the New York Jets started SAM DARNOLD, the No. 3 overall selection in the 2018 Draft, on Kickoff Weekend. At least one rookie quarterback has started in Week 1 in 11 consecutive seasons, the longest streak in the NFL since at least 1950. By the end of the season, all five first-round quarterbacks -- BAKER MAYFIELD, Darnold, JOSH ALLEN, JOSH ROSEN and LAMAR JACKSON -- from the 2018 NFL Draft had started at least seven games for their respective teams.