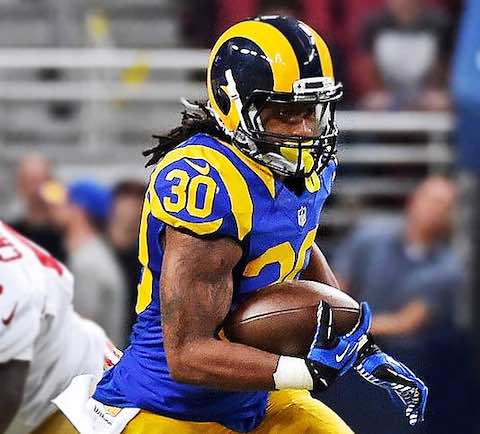 Los Angeles Rams running back TODD GURLEY ranked third in the NFL with 1,251 rushing yards and led the league in rushing touchdowns (17) and total touchdowns (21) last season. In 2018, Gurley scored at least one touchdown in each of the Rams' first 10 games and joined Pro Football Hall of Famers O.J. SIMPSON (14 games in 1975), LENNY MOORE (14 in 1964) and ELROY "CRAZY LEGS" HIRSCH (10 in 1951) as the only players in NFL history to score a touchdown in each of their team's first 10 games of a season.

"[Todd Gurley] does so many things well. He's got the ability to break a lot of tackles." - Chicago Bears linebacker ROQUAN SMITH on Gurley

Dallas Cowboys running back EZEKIEL ELLIOTT led the NFL with 1,434 rushing yards and became the fifth player to lead the league in rushing yards in two of his first three seasons.

Barkley finished second in the league with 1,307 rushing yards in 2018 and became the first rookie in Giants history to rush for more than 1,000 yards.

Since entering the league in 2017, New Orleans running back ALVIN KAMARA has been a force to reckon with in both the running game and passing game. Kamara joined Carolina running back CHRISTIAN MCCAFFREY and former NFL running back HERSCHEL WALKER as the only players to record at least 1,500 rushing yards and 1,500 receiving yards in their first two seasons in NFL history.

"There's a level of awareness with him that I think is unique. He picks up on things very quickly. I think that's unique. And so then combine that with exceptional athletic skills and you get the player that he is." -- New Orleans quarterback DREW BREES on Kamara

McCaffrey's 187 receptions are tied with ODELL BECKHAM JR. for the third most among all players in their first two seasons in NFL history.

"It's encouraging and motivating to see a guy that can attack a defense in so many different ways, whether handing the ball off, whether blocking, whether throwing the ball down the field. I've never been around anything [like him] ... He's a person who plays bigger than he is, and his impact on the game helps us so much." -- Carolina Panthers quarterback CAM NEWTON on McCaffrey

The 2018 rookie class featured some of the most prolific rookie seasons for running backs in league history. Below is a sampling of statistical highlights from several of the league's top young rushers.

New York Giants running back SAQUON BARKLEY led the NFL in scrimmage yards (2,028) and ranked second in rushing yards (1,307) in 2018. Barkley had 91 receptions and surpassed REGGIE BUSH (88 in 2006) for the most receptions by a rookie running back in league history. The Giants rookie joined Pro Football Hall of Famer ERIC DICKERSON (2,212 scrimmage yards in 1983) as well as EDGERRIN JAMES (2,139 in 1999) as the only rookies to record at least 2,000 scrimmage yards in NFL history.

In 2018, New England running back SONY MICHEL set the NFL postseason record for the most rushing touchdowns by a rookie with six, and finished tied for the second-most rushing touchdowns in a single postseason by a player in NFL history, trailing only Pro Football Hall of Famer TERRELL DAVIS (eight in 1997). Michel finished his rookie campaign with 931 rushing yards, which surpassed LAWRENCE MARONEY (745 in 2006) for the most rushing yards by a rookie under head coach Bill Belichick.

They seem to be all over the league. Those running backs, like MELVIN GORDON and DAVID JOHNSON that can hurt you two ways: rushing or catching the ball.

Dual-threat running backs not only force defenses to be ready for anything, they allow offenses to keep their best playmakers on the field in any situation.

More and more offenses are relying on these dual-threat players to keep the chains moving. Eight running backs rushed for at least 800 yards while adding at least 50 receptions in 2018, the most in a single season since 2002.

"I think he's just gotten to the point where he sees the running back as a three-down position." - Los Angeles Chargers quarterback PHILIP RIVERS on Melvin Gordon

New York Giants running back SAQUON BARKLEY became the first rookie in franchise history to surpass 1,000 rushing yards. Barkley totaled seven games with at least 100 rushing yards, tied with EZEKIEL ELLIOTT for the most in the NFL last season.

Seattle running back CHRIS CARSON became the Seahawks' first 1,000-yard rusher since 2014 and joined SHAUN ALEXANDER, MARSHAWN LYNCH and RICKY WATTERS as the only Seattle running backs with 1,000 rushing yards in a single season since 2000.

Carolina running back CHRISTIAN MCCAFFREY became the fifth Panther to record a 1,000-yard rushing season. In 2018, he became the first player in league history with at least 50 rushing yards and 50 receiving yards in five consecutive games (Weeks 9-13).

Tennessee running back DERRICK HENRY rushed for 238 yards and four touchdowns in Week 14, the highest single-game rushing total and tied for the most rushing touchdowns in franchise history. In Weeks 14-15, Henry became the fifth player since 2002 to record at least 170 rushing yards and two touchdown runs in consecutive games.