The NFL's Best Players on Defense 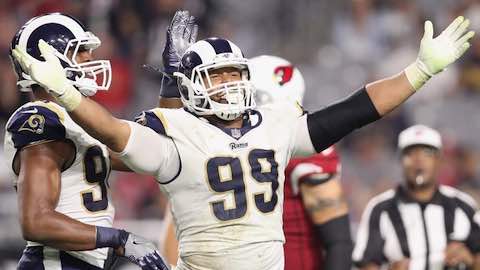 A look at this season's best defensive players in the NFL.

Los Angeles Rams Pro Bowl defensive tackle AARON DONALD earned NFL Defensive Player of the Year honors for the second consecutive season after leading the NFL with a franchise-record 20.5 sacks and 25 tackles for loss in 2018. He joins Pro Football Hall of Famer LAWRENCE TAYLOR (1981 and 1982) and J.J. WATT (2014 and 2015) as the only players since the award's inception in 1971 to win Defensive Player of the Year in consecutive seasons.

In 2018, Donald recorded at least two sacks in seven games and became the fourth player since 1982 to record at least seven games with two-or-more sacks in a single season.

The 13th overall selection in the 2014 NFL Draft, Aaron Donald has excelled at generating pressure in the backfield through his first five seasons. Since he entered the league, he leads all defensive players with 97 tackles for loss and ranks tied for third with 59.5 sacks.

In 2018, Houston defensive end J.J. WATT led the AFC and ranked second in the NFL with 16 sacks and had a career-high seven forced fumbles. The three-time Defensive Player of the Year has four seasons with at least 15 sacks, the second most behind only Pro Football Hall of Famer REGGIE WHITE (five seasons) since 1982 when the individual sack became an official statistic.

Watt was named first-team All-Pro for the fifth time, while also being named to the AP's second team as an interior lineman.

Denver linebacker VON MILLER tied for fourth in the league with 14.5 sacks in 2018 and joined Pro Football Hall of Famer REGGIE WHITE (eight) and DEMARCUS WARE (seven) as the only players since 1982, when the individual sack became an office statistic, to register double-digit sacks in seven of their first eight seasons. Miller became the 11th player since 1982 to record at least 10 sacks in five consecutive seasons and has the longest active streak in the league.

Since entering the league in 2011, Miller leads the league in sacks (98) and is the only player to record at least 95 sacks in the past eight seasons.

With 16 players recording at least 12 sacks, the 2018 season tied 1992 (16 players) for the third-most players with at least 12 sacks in a single season since 1982 when the individual sack became an official statistic.

"He is out there all the time, and he's getting a lot of shots at you. He's got such explosiveness that if you give him enough chances he's just going to make a play. That's kind of how [the sack streak] has happened. Chris has done a great job of timing his rushes up and knowing what's coming and making people miss, and he's really hard to deal with." -- Seattle Seahawks head coach PETE CARROLL on Jones

"He's always making plays. That's why I'm never really worried, because we've got a guy like him back there to help make plays. And he does it every week." -- Los Angeles Rams running back TODD GURLEY on Donald

"He's a Pro Bowler, first-ballot Hall of Famer, in my opinion. I'm very happy I had the chance to be with this man and really learn from him." -- Eagles defensive tackle MALIK JACKSON on former teammate Calais Campbell

In his first season with Chicago, linebacker KHALIL MACK had a career-high six forced fumbles and helped the Bears tally the most takeaways in the NFL with 36. Since entering the league in 2015, Mack leads the NFL with 14 career forced fumbles.

"He's had a very big impact from the very first day he walked onto that practice field. You could feel it. It's the same each day with him. You just feel a guy that has extreme confidence in himself, yet he has a lot of confidence with his teammates, too. We love everything he's brought." -- Chicago Bears head coach MATT NAGY on Mack

As the league features more passing on offense, the importance of a stout secondary is heightened. Players like KYLE FULLER, XAVIEN HOWARD and EDDIE JACKSON proved last season the impact defensive backs can have in a game.

"Kyle is playing like one of the best corners, if not the best corner, in the league right now. He's been consistent, playing on a high level." -- Chicago cornerback PRINCE AMUKAMARA on Kyle Fuller

Fuller also tied Miami's XAVIEN HOWARD and Atlanta's DAMONTAE KAZEE for the league-lead in interceptions last season among defensive backs with seven, a career high for all three players.