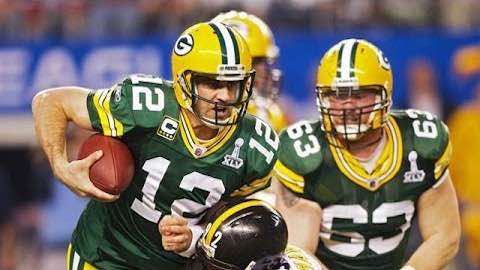 Rodgers' two interceptions during the 2018 season were the fewest in a season in league history by a quarterback with at least 500 attempts, and his career interception percentage (1.46) is the lowest among all players in league annals (minimum 1,000 attempts).

Entering his 15th season, Aaron Rodgers has a 103.1 career passer rating, the highest passer rating of any quarterback in NFL history ahead of Russell Wilson 100.3, Drew Brees 97.7 and Tom Brady 97.6 (minimum 1,000 attempts).

With at least 35 touchdown passes in 2019, Aaron Rodgers can become the first quarterback in league annals to accomplish the feat in five different seasons.

"He's done that every year. He's got the highest quarterback rating in the history of the NFL by a wide margin and that's a big reason why. He's never thrown a lot of picks.” - Denver Broncos head coach VIC FANGIO on Aaron Rodgers