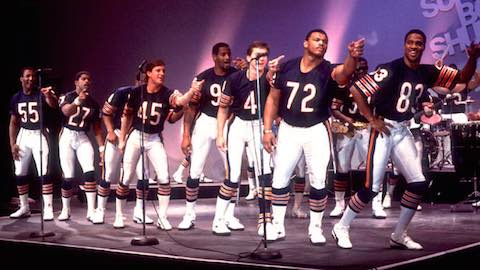 The 1985 Super Bowl XX champion Chicago Bears not only had one of the greatest running backs and defenses of all-time in Pro Football Hall of Famer WALTER PAYTON and the famed "46" alignment, but also a true cast of characters.

One of the most memorable parts of that season was a rap video that a group of Bears players -- known as the "Bears Shufflin' Crew" -- performed called the "Super Bowl Shuffle." Payton, quarterback JIM MC MAHON, wide receiver WILLIE GAULT, linebacker MIKE SINGLETARY and defensive tackle WILLIAM "THE REFRIGERATOR" PERRY, among others, taped the video for charity. It won a Grammy nomination for Best R&B Vocal Performance by a Duo or Group and reached No. 41 on the charts, ultimately going Gold on February 2, 1986.

"It gave us a sense of pride to know we accomplished something as a group, something very few people get an opportunity to do," said Gault. "And to win the Super Bowl on top of that was really rewarding."

Following is the song's famed chorus:

We are the Bears Shufflin' Crew,

Shufflin' on down, doin' it for you.

Struttin' our stuff for everyone.

We're not here to start no trouble,

We're just here to do the "Super Bowl Shuffle."