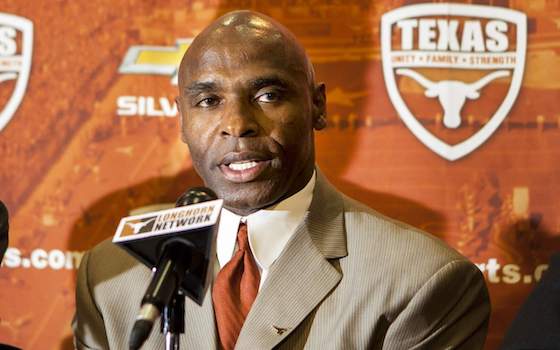 According to several media outlets, Strong and Texas agreed on a five-year deal worth $5 million annually in a move to be made official Monday.

In his four years with the Cardinals, the 53-year-old Strong led the team to a 37-15 record, including a 23-3 mark over the past two seasons.

Led by potential NFL top pick Teddy Bridgewater, the Cardinals went 12-1 this season and beat Miami, 36-9, in the Citrus Bowl.

As expected, Texas has announced the hiring of Charlie Strong as its new head football coach, calling the former Louisville mentor as "a man of integrity and well respected inside and outside the game".

"Our committee and former lettermen helped create an extensive selection criteria and after visiting with Charlie, it was clear he met them all," Texas athletic director Steve Patterson said in a statement.

"He led championship defenses as an assistant, a resurgence at the University of Louisville with double-digit game winning seasons, and twice been selected conference coach of the year," Patterson added.

The 53-year-old Strong, who replaces Mack Brown after 16 seasons, led the Cardinals to a 37-15 record in his four years at the helm after taking over a Louisville program coming off three straight non-winning seasons.

"To follow a future Hall of Fame coach like Mack Brown, who built a program that had great success and a reputation of doing it with class and integrity, is extra special," Strong said in the statement.

"The National Championship, BCS Bowl wins and all he accomplished in 16 years built on the Longhorn legacy and makes it such an exciting place to be," he added.

Strong will be the first black head coach of any men's sport in school history. UT president Bill Powers called it "a historic day for The University of Texas and a historic hire for our football team."

Strong inherits a Texas program that went 8-5 and 7-2 in the Big 12 in Brown's final season and lost to Oregon 30-7 in the Valero Alamo Bowl. Brown resigned on Dec. 14 and finished his Texas career with a record of 158-48.

Did Strong make the right decision?