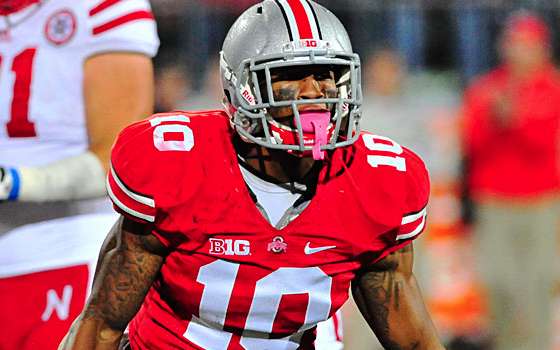 The Ohio State Buckeyes will lose junior linebacker Ryan Shazier to the NFL but gets to keep two-time defending Big Ten offensive player of the year Braxton Miller.

Both juniors had put off making a decision until after the Discover Orange Bowl, with an interception by Miller ending any hopes of a late comeback as they trailed 40-35.

Shazier, who led the team in tackles for each of the last two seasons, will capitalize on his high draft stock after a pair of productive seasons at outside linebacker.

He had a Big Ten-best 134 tackles heading into the Orange Bowl, and his 22.5 tackles for loss were 5.5 more than anybody else in the conference.

Shazier is the third outside linebacker and 16th overall player on Mel Kiper Jr.'s Big Board, but he is not among Scout Inc.'s top 32 players.

Miller's return for his senior season gives him a chance to become the only player ever to win the Big Ten offensive player of the year award three times and potentially boost his stock as a professional passer.

He struggled with his accuracy late in the season, but he had left the door open for skipping his final year of eligibility and pronounced himself ready for the next level during interviews leading up to the matchup against Clemson.

Miller is not considered by draft experts one of the Top 10 quarterbacks available.

While Miller has a unique skillset of athleticism and playmaking ability, NFL scouts noted that he does not have elite arm strength or accuracy and the fact he was used mostly as a runner has limited his experience in reading defenses.

His return places him as a Heisman Trophy favorite, along with Florida State's Jameis Winston and Auburn's Nick Marshall, for next season.

Ohio State went 22-2 in the last two seasons that Miller started at quarterback.