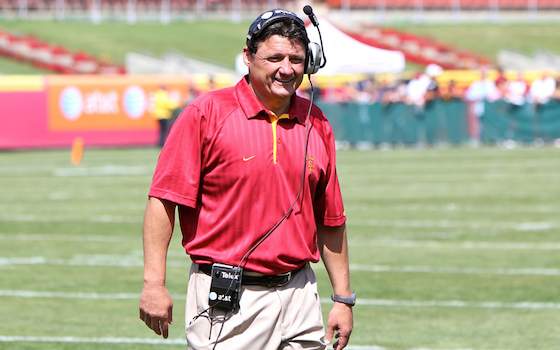 New USC head football coach Steve Sarkisian plans to pursue Ed Orgeron again and include him in his coaching staff next season.

Orgeron went 6-2 as USC's interim head coach after Lane Kiffin was fired Sept. 28 but the Trojans bypassed him and signed Sarkisian as their mentor. Orgeron was under the impression that the Trojans will sign him as permanent coach.

"I am going to pursue Ed here one more time," Sarkisian told the "Trojan Brunch" show on ESPNLA 710. "I thought about him again after the game on the ride home."

"I think when emotions get settled down, and I know that was an emotional time for Ed and not getting named the head coach when he thought he should have been deservedly so, I would have felt the same way," he added.

Sarkisian is in the hunt for another assistant after Tosh Lupoi, his defensive line coach and recruiting coordinator at Washington, was being investigated for potential rules violations after he allegedly paid for tutoring and online classes for a recruit.

"I learned of the allegations this past Friday and I was obviously surprised by them," Sarkisian said. "I think this potential allegation could affect not only Tosh's future at USC but moving forward anywhere."

Clay Helton, who served as USC's third coach this season during the Trojans' 45-20 win over Fresno State in the Royal Purple Las Vegas Bowl Saturday, has already committed to returning to USC next season.

A source revealed that Helton would be the team's offensive coordinator, which is the same position he held last season.