It's Naive to Think College Athletes Have Time for School 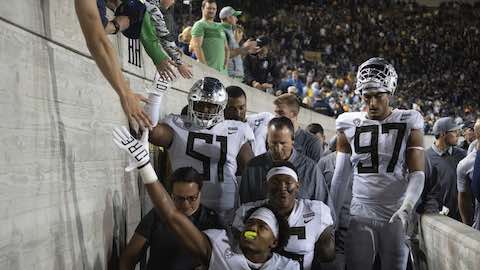 Research shows student-athletes spend triple the amount of time on sports as on academics, raising questions about whether they actually benefit from a college education.

From my first day as a sociology professor at a university with a Division I football and men's basketball team, education and athletics struck me as being inherently at odds.

Student-athletes filled my courses to take advantage of the fact that the classes met early in the morning.

The football and men's basketball players -- most of whom were black -- quickly fell behind due to scheduling constraints. Only so much time was set aside for academics and, often, it wasn't enough. Academic rigor and athletic success were simply incompatible goals.

Now -- as a researcher who is studying college athletes through the lens of race and class -- I have compiled evidence to show just how much more time college athletes devote to sports over academics.

Early data from my ongoing research on the academic experiences of black Division I football and men's basketball players shows that they spend three times as many hours per week on athletics as they do on academics. On average, the players spend more than 25 hours on sports-related activities other than games, such as practice, workouts, general team meetings, film sessions and travel. On the other hand, the player spend less than eight hours on academics outside of class, such as writing papers, studying, getting tutored or working on group projects. This imbalance is institutionally constructed and perpetuated. Perhaps most disturbingly, the student-athletes I surveyed perceive this lopsided situation as "normal."

Some may argue that the players should be satisfied with the fact that their scholarships enable them to reap the benefits of a college education. The problem with that argument is that college athletes aren't able to fully actualize their identities as students to the same degree as their classmates. College sports is just too demanding, and universities do not make any special concessions for athletes' additional time commitments.

It is important to distinguish the lives of college athletes who don't generate money for their institutions, such as soccer and tennis players, versus those who are deeply intertwined with the generation of revenue for colleges, universities and the NCAA, which cleared US$1 billion in revenue in 2017. That kind of money cannot be made without serious time commitments among the players.

Every time I watch a college football or men's basketball game on TV, I can't help but wonder what the players on my screen missed in class that day.

They are students such as Jalen (a pseudonym), a football player who requested a meeting with me mid-semester. He wanted to discuss how my office hours conflicted with the team practices and film sessions. For an hour we discussed what he understood as unfixable. Jalen wanted and needed to utilize the main academic support systems provided by the college, but literally didn't have the time.

Jalen was by no means alone. Rather, his plight was emblematic of untold numbers of college athletes who struggle to balance sports and academics.

So, are college athletes workers who attend school part-time? Or are they students who play sports part-time? Players at schools across the country are speaking up about the fact that they generate revenue for the colleges they play for but not for themselves. They have attempted to unionize and filed lawsuits to get what they see as their fair share.

Meanwhile, the NCAA claims that student-athlete balance is not only possible, but that most Division I players achieve it.

The reality is most football and men's basketball players underperform academically and routinely graduate at lower rates than "other student-athletes, black non-athletes and undergraduates in general."

The NCAA continues to describe Division I football and basketball players as "regular students who happen to play sports." However, the NCAA rarely details how this student-athlete balance is supposed to work. There are tournament time commercials that remind viewers how most college athletes "will go pro in something other than sports." However, less mentioned, if at all, are what kind of practical routes exist to this theoretically "balanced" identity. Even the NCAA's own surveys of college athletes show that athletics takes precedence over academics.

Coaches and college staffers are getting rich in the name of higher education while their mostly black players are -- in their own words -- "broke." And this despite the fact that student-athlete responsibilities have grown as the business of college sports grows. For instance, some of the games last longer, and the average hours that players spend per week on athletes continues to creep upward.

Almost 60 percent of participants in my current national research study find it difficult or very difficult to balance sports and academics -- from the moment they set foot on campus until graduation, if they graduate at all. Considering the fact that less than 2 percent of college football players get into the National Football League, and only 1.2 percent of college basketball players get drafted into the National Basketball Association, the reality is that many college athletes will never see a payoff in professional sports. But the real tragedy is that -- having devoted so much time to sports instead of their studies -- they won't really get to see their college education pay off, either.

College Sports: "It's Naive to Think College Athletes Have Time for School"