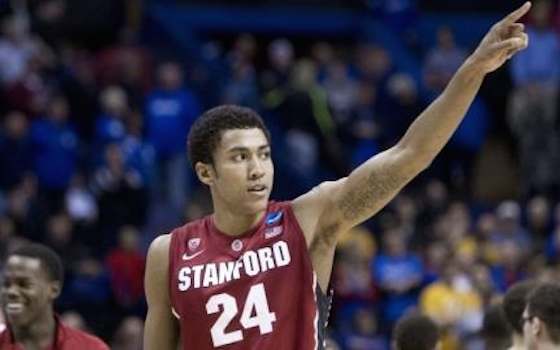 Dwight Powell scored 15 points while Anthony Brown buried five free throws in the last 44 seconds to carry Stanford to a 60-57 upset victory over No. 2 Kansas and into the Sweet 16 of the NCAA Tournament Sunday at Scottrade Center.

Chasson Randle added 13 points while Stefan Nastic and Anthony Brown had 10 apiece for the 10th seed Cardinal (23-12), who will take on 11th seed Dayton in Thursday's South Region semifinals in Memphis.

Stanford made it to their first Sweet 16 in six years despite going 0-for-9 on 3-pointers, tying 1999 UConn for the most three-point attempts without a make in an NCAA Tournament win.

Tarik Black scored 18 points while Conner Frankamp added 12 off the bench for the Jayhawks, who missed the services of injured center Joel Embiid.

Without Embiid, the Jayhawks scored just 20 points in the paint against the Cardinal, their second-lowest total of the season.

Top freshman Andrew Wiggins was also a non-factor as he scored a season-low four points on 1-for-6 shooting and had four turnovers.

Brown's two foul shots put the Cardinal ahead, 58-51, with 32.4 seconds to play. However, Conner Frankamp buried a pair of triples around one Brown free throw to pull the Jayhawks within two with 14.9 seconds remaining.

Brown then split his charities to give Kansas another lease on life but Frankamp's hurried attempt from beyond the arc in the closing seconds came up empty.