Scottie Wilbekin Sparks No. 1 Florida Past Pitt, into Sweet 16 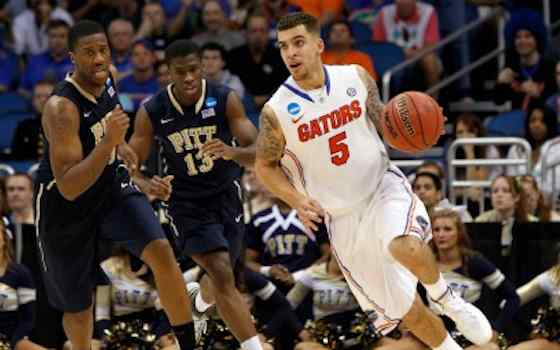 Inside Florida's Win Over Pittsburgh

Scottie Wilbekin scored a game-high 21 points as No. 1 Florida pulled away in the second half en route to a 61-45 win over Pittsburgh and a spot in the Sweet 16 of the NCAA Tournament Saturday at Amway Center.

Michael Frazier II added 10 points while Will Yeguete and Casey Prather chipped in with eight apiece as the Gators (34-2) committed just six turnovers and just seven fouls to clinch their 28th straight win.

The victory was No. 448 for coach Billy Donovan, who moved past LSU's Dale Brown for the second most wins for a coach in the SEC behind Adolph Rupp.

The Gators aim for a fourth consecutive Elite Eight appearance Thursday against UCLA in the Sweet Sixteen.

Talib Zanna scored 10 points while leading scorer Lamar Patterson was limited to eight on 3-of-11 shooting for the Panthers (26-10), who matched Florida bucket-for-bucket in the first half but made just 35 percent of their shots in the second.

The opening half featured nine lead changes and three ties with neither side leading by more than five. Florida took a slim 27-22 edge into the break after Wilbekin beat the buzzer with a 3-pointer from top of the key.

In the second half, Patric Young keyed a 7-0 run that gave the Gators a 34-24 cushion as the Gators held Pitt scoreless in six minutes. The Gators were never threatened from there.

Patterson, who came in averaging 17.4 points per game, missed all four of his field goal attempts in the second half.

Inside Florida's Win Over Pittsburgh

Scottie Wilbekin leads top-seeded Florida to victory over Pittsburgh. Our Gators Insider Chris Harry was in Orlando and tells us the latest including what Coach Billy Donovan said to his team that has them heading to the Sweet 16

"Scottie Wilbekin Sparks No. 1 Florida Past Pitt, into Sweet 16"