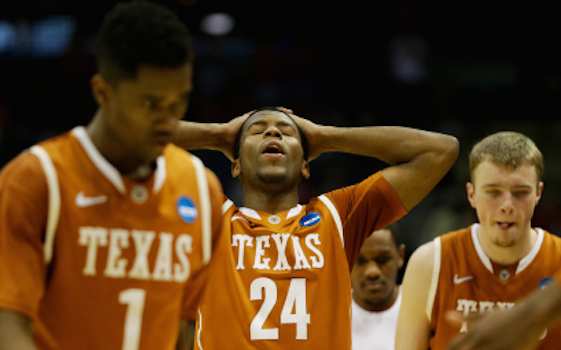 What Went Wrong For Texas

Nik Stauskas scored 17 and had eight assists to lead the Michigan Wolverines past the Texas Longhorns, 79-65 Saturday at BMO Harris Bradley Center.

He also hit four of Michigan's 14 3-pointers, as Texas only answered with four successful hits from beyond the arc.

Jordan Morgan added 15 points and 10 rebounds while Caris LeVert and Glenn Robinson III had 14 points each in pushing second-seeded Michigan to the NCAA's Sweet 16.

Michigan (27-8) raced to a 30-12 lead with 7:22 in the first half as Stauskas had three 3-pointers, Zack Irvin hitting a couple and LeVert adding another.

Texas rallied to outscore Michigan 17-5 in the next seven minutes to trim the disparity to 58-52 with 8 minutes left.

Then Robinson scored on a jumper followed by a 3-pointer to stop Texas' momentum.

Texas wasn't done and closed in at 68-60 following a Jonathan Holmes dunk and an Isaiah Taylor jumper with still 3:09 remaining.

Michigan faces the Tennessee Volunteers in the Sweet Sixteen.

Taylor scored 22 points for Texas on 8-for-22 shooting.

What Went Wrong For Texas

Should Texas fans be concerned about the future of the program? Campus Insiders catches up with Texas Insider Ted Emrich on the Longhorns' struggles in their 79-65 loss to Michigan