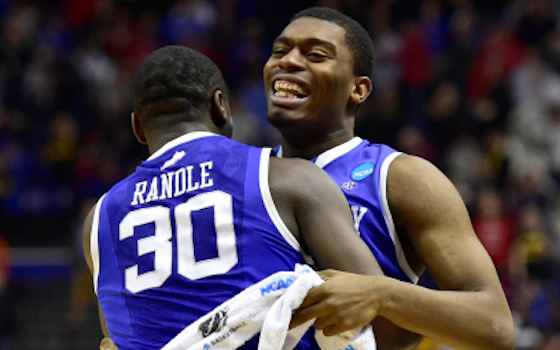 Julius Randle contributed 13 points and 10 rebounds for the win.

Kentucky (26-10) took a 19-15 lead midway through the half before Wichita State forced a series of turnovers to grab their biggest lead at 32-23 lead with 4:35 left before halftime.

After Wichita State (35-1) enjoyed a 37-31 lead at the break, Cleanthony Early opened up the second period with another 3-pointer to match their biggest lead at 40-31.

After Kentucky rallied, the game was back-and-forth with neither team leading by more than five.

Kentucky took a 73-71 lead when James Young knocked down a 3-pointer with less than 2 minutes to go.

With 9.8 seconds left and Kentucky ahead 78-76, Andrew Harrison missed his second free throw and Early pulled down the rebound.

Fred VanVleet a potential game-winning 3-pointer at the buzzer, allowing Kentucky to advance to the Sweet Sixteen against Louisville on Friday in Indianapolis.

Andrew Harrison scored 20 points, twin brother Aaron added 19 as Kentucky survived a potential winning 3-pointer at the buzzer by Fred VanVleet to knock off the undefeated Shockers with a 78-76 victory