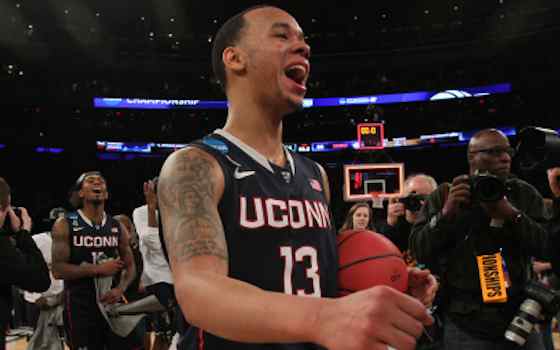 Shabazz Napier poured 17 of his 25 points in the second half as UConn overcame a nine-point deficit en route to a 60-54 win over Michigan State in Sunday's East Regional final at Madison Square Garden.

With the victory, the Huskies became the second 7th seed ever to reach the Final Four. Virginia made the Final Four in 1984 and lost in the National Semifinals to Houston. Rick Carlisle and Olden Polynice were on that Virginia team.

Kevin Ollie became the fourth coach in the last 20 years to reach the Final Four within his first two seasons as a Division I head coach, joining VCU's Shaka Smart, Indiana's Mike Davis and North Carolina's Bill Guthridge. However, none of the other three coaches won the National Championship.

The Huskies will take on will face No. 1 seed Florida on April 5 in Airlington, Texas.

Napier also added six boards and four assists, DeAndre Daniels chipped in 12 points and eight rebounds while Ryan Boatright had 11 for the (30-8), who knocked off second-seeded Villanova and third-seeded Iowa State before beating the Spartans.

Gary Harris scored 22 points on 8-for-14 shooting while Adreian Payne added 13 points and nine boards for the Spartans, who led by as many as nine early in the second half before Napier took over.

This marked the first time that coach Tom Izzo and the Spartans have lost in the Elite Eight as the higher seed.

Napier scored seven of his output during a pivotal 12-0 run that turned UConn's nine-point deficit into a 35-32 lead with under 12 minutes left.

Napier then sank all three free throws after being fouled by Keith Appling from beyond the arc, giving UConn a 56-51 lead with 30.6 seconds left.

All season long Doug McDermott has been the frontrunner for the player of the year, but Campus Insiders' Jordan Cornette says there's a more deserving student-athlete and he just led UConn to the Final Four