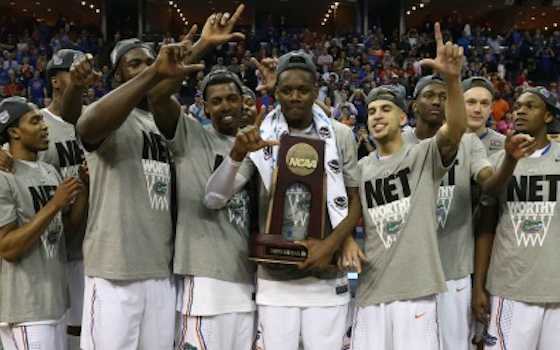 Scottie Wilbekin scored 14 of his 23 points in the first half to help No. 1 Florida book a spot in the Final Four with a 62-52 victory over No. 11 Dayton in Saturday's South Regional Finals at FedEx Forum.

Wilbekin made six of 14 attempts from the floor and eight of 10 tries from the foul line, Patric Young added 12 and Michael Frazier II added 10 as the Gators (36-2) ended Dayton's Cinderella run and advanced to the Final Four for the first time in seven years.

Florida will face the winner of Wisconsin-Arizona next Saturday in a national semifinal. They are seeking their third national championship under coach Billy Donovan, who steered them to back-to-back titles in 2006 and 2007.

However, the Gators had not advanced past the Elite Eight in the last three seasons.

Dyshawn Pierre scored 18 points while forward Devin Oliver added12 points on four triples for the Flyers, who ended their campaign with a 26-11 mark.

Dayton was the biggest surprise in the tournament, beating No. 6 Ohio State in the second round, No. 3 Syracuse in the third round and Stanford in the Sweet 16 to advance to the Elite Eight for the third time.

The first half was close for a while as Dayton made some outside shots and even scrapped its way to a couple of narrow leads.

However, the Gators asserted their might in the last seven minutes, outscoring the Flyers, 19-3, to take a 14-point at the break.

In the second half, Dayton cut the deficit to less than 10 twice but scored just seven in the last six minutes, allowing Florida to take the win.

Florida is headed to the Final Four after knocking off the Dayton Flyers. But could the Gators be overrated? Campus Insiders' Jordan Cornette and Bonnie Bernstein explain why Billy Donovan's team still has a lot to prove before cutting down the nets at AT&T Stadium

"Scottie Wilbekin leads No. 1 Florida over Dayton into Final Four"