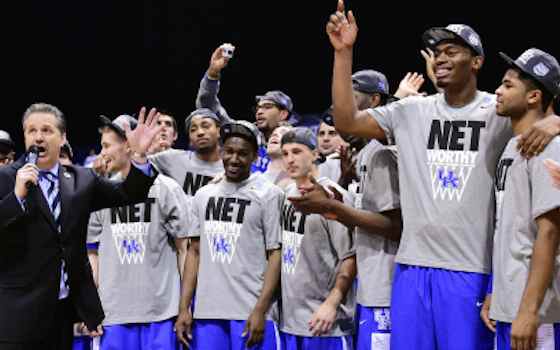 Aaron Harrison hit the winning 3-pointer to lift the Kentucky Wildcats over the Michigan Wolverines, 75-72 Sunday at Lucas Oil Stadium for a trip to the Final Four.

Julius Randle had 16 points and 11 rebounds for his 24th double-double and was named the region's most outstanding player.

Michigan raced to a 14-6 lead following Nik Stauskas' 3-pointer. A Dakari Johnson layup cut Kentucky's deficit to 20-19 at 10:09 of the first half.

Michigan jumped back to a 32-22 lead after a 10-3 blast capped by a five-point production from Stauskas.

Kentucky fought back to tie the game at 37 by halftime. A Randle jumper and a Johnson layup gave Kentucky a 43-39 early in the second half.

Michigan closed in at 72-70 following a Glenn Robinson 3-pointer.

Still trailing 72-70 and with ball possession and just 31 seconds left, Michigan made several attempts with the last inadvertently tipped in by Randle that tied the game at 72.

But with 10 seconds left, the ball went to Harrison who spotted up from about 25 feet for the win.

This is the first all-freshman starting lineup to make the Final Four since another well-known group, the Fab Five of Michigan, did it in 1992.

The Wildcats will play Wisconsin next Saturday. Stauskas finished with 24 points to lead Michigan.

For the first time since 1992, an all-freshman starting lineup is headed to the Final Four. That's just one of the reasons Campus Insiders' Jordan Cornette believes this season is John Calipari's best coaching job