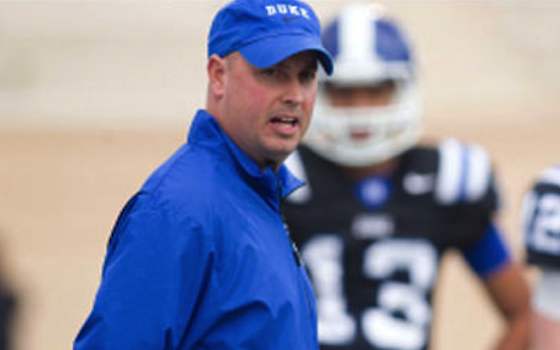 Roper has served as Duke's offensive coordinator since 2008 and assistant head coach and quarterbacks coach at the same time.

In 2012, Roper helped direct the Blue Devils to a school single-season record of 410 points and 31.5 points per game, the fifth-highest total in school history.

Roper started his coaching career at Tennessee while serving as a graduate assistant from 1996-98 and then followed current Duke head coach David Cutcliffe to Ole Miss, where he spent six years coaching quarterbacks and was the passing game coordinator during his final three seasons.

In 2005, Roper served as Kentucky's quarterbacks coach before serving as running backs coach at Tennessee in 2006 and 2007.

Pease was fired after Florida ranked last in the SEC in total offense (316.7 yards per game) and scoring (18.8) during a 4-8 season. It was the first time since 1979 that the Gators suffered a losing season and the first time in 22 years that they failed to make a bowl game.

"I'm excited to have Coach Roper join our staff," Gators head coach Will Muschamp said in a statement released by the University of Florida. "He has a diverse, up-tempo background on offense and does a good job of adapting to what the players do best. The most important thing though is he has always remained balanced."

"He has had success calling plays in the SEC and has tutored three NFL quarterbacks. He has had players produce at every offensive position and he is one of the most well-respected coaches in the country."

According to sources, Roper will earn $600,000 in his first season with the Gators.