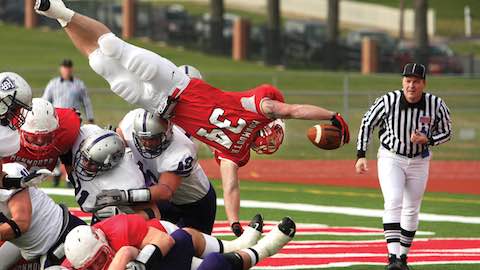 As the anticipation for football season continues to build, fans can look forward to more action on college campuses this fall. Five colleges will add football programs in 2016

As the anticipation for football season continues to build, fans can look forward to more action on college campuses this fall. Five colleges will add football programs in 2016 -- Cincinnati Christian University, Davenport University, Morthland College, University of Texas Of The Permian Basin and University of West Florida.

Since 2008, a total of 60 NCAA and NAIA schools have added football teams and six additional schools plan to add football programs by 2018.

According to the National Football Foundation, a record 780 colleges/universities will have football programs by 2018.

"Following our study with the consulting firm, they came back and recommended that we consider adding intercollegiate football," said Indiana Wesleyan athletics director MARK DE MICHAEL after the school announced they plan to add football in 2018. "We are here to make Indiana Wesleyan stronger and more sustainable. Adding 105-130 more students who will excel in the classroom is a great thing."

Two of the new schools that will begin play this fall, Cincinnati Christian University in Ohio and Davenport University in Grand Rapids, Michigan, have started plans to construct new multi-sport stadiums and other on-campus facilities.

"A football program will help us to create an outstanding experience for our students and will support the continued growth of Davenport," said DR. RICHARD J. PAPPAS, President of Davenport University. "We look forward to creating a high-quality program in which all of our stakeholders can take great pride."

"This is truly an historic occasion for Texas Wesleyan," said Texas Wesleyan University president FREDERICK G. SLABACH after the school's announcement to add football in 2017. "Football will bring a new team of student-athletes who will thrive at our Texas Wesleyan campus."