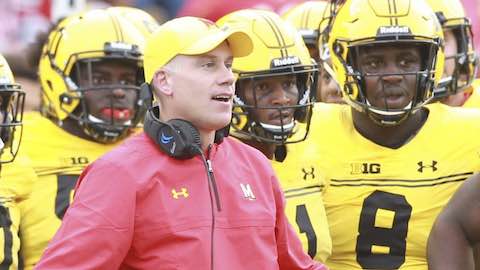 Maryland college football coach DJ Durkin was ultimately fired after the death of a player during practice -- and findings that his players were bullied and abused by coaches and staff over the course his three-year tenure. However, his 11th hour ouster on Oct. 31 is evidence of how much the culture of college football still needs to change.

This culture encourages players to ignore signs of physical or mental exhaustion and is present across the college football landscape, not just at Maryland.

Durkin may be gone, but only because the public -- including current players, students and alumni at the University of Maryland -- wanted him gone. It wasn't because the people in charge of Maryland's university system suddenly realized how wrong it was for Durkin to run a program in which complaining of pain was seen as unmanly.

Loh initially responded by announcing his own resignation. But after hearing the public outcry after the board moved to reinstate Durkin -- Loh fired Durkin instead.

In a statement, Loh noted how "the overwhelming majority of stakeholders expressed serious concerns about Coach DJ Durkin returning to the campus."

"This is a difficult decision, but it is the right one for our entire University," Loh stated. He also vowed to devote the remaining months of his presidency to "advancing the needed reforms in our Athletic Department that prioritize the safety and well-being of our student-athletes."

A student-led protest was reportedly being planned before the firing took place.

In our view as researchers who focus on the intersection of race and college sports, none of these events will rid big-time college sports of its deepest problems. Those problems include the placing of winning games and generating revenue ahead of the best interests of the student-athletes.

In recent years, legal activists like former athletes Ed O'Bannon, Cain Colter and Martin Jenkins have sought to change this state of affairs.

It would be naive not to view big-time college sports through the lens of race. A recent report that shows black males make up only 2.4 percent of the general student body at Power 5 Bowl Championship Series schools, but 55 percent and 56 percent, respectively, of football and men's basketball teams.

Further, black male college athletes graduate at the lowest rates among all college athletes and in the NCAA and Division I Power 5 member institutions, which generate billions of dollars primarily off the broadcasting and sponsorship rights for football and men's basketball.

These trends underscore how black males are primarily valued at these institutions as athletic gladiators, but not as students deserving of quality educational opportunities and support for their overall well-being.

Had Durkin been allowed to continue to coach despite the toxic culture uncovered at Maryland following the May 2018 death of 19-year-old offensive lineman Jordan McNair, many would have considered it a gross miscarriage of justice.

McNair died of heatstroke during practice earlier this year. A cold-water immersion would have likely saved his life but team staff and coaches failed to promptly seek medical assistance.

While player deaths during practice may be rare, indifference toward black athletes, especially their physical and mental health, is widespread in college sports.

The prevalence of college athletes' unmet mental and physical health needs is well-documented. The NCAA's Sport Science Institute, through its own research, has acknowledged that college athletes' health issues remain a major problem.

Yet, as the story of Durkin demonstrates, both the NCAA -- and the University of Maryland as one of its member institutions -- have failed to create and enforce policies that hold coaches responsible for creating conditions that are injurious to college athletes' overall well-being.

The system seems more bent on policing and punishing black student-athletes than it does on holding accountable those who are responsible for their care.

For instance, several players on the University of North Carolina football team were suspended for four games for selling their team-issued shoes in violation of NCAA rules. Another black player, a University of Central Florida kicker, was ruled ineligible after receiving money through a YouTube channel he created.

These student-athletes who engaged in victimless acts and tried to make a few dollars in a system that makes billions of dollars from their labor are made to sit out games or get kicked off the team entirely. Yet, as demonstrated by the initial decision to keep Durkin, neglecting the health needs of a player in medical distress is excusable.

Being a college athlete is inherently tough work. One of us is conducting research into black Division I football and men's basketball players. Thus far, the research shows 64 percent of respondents find it difficult or very difficult to balance their student and athlete identities while they're in season, compared to only 34 percent when out of season.

These numbers illustrate the imbalance in what college athletes are expected to do versus how much time they have for school. If it's already difficult for players to manage the demands of college and the obligations to their team, how much more difficult was it for Maryland football players, who faced a football culture that normalized physical and mental abuse under Durkin. It was noted in a report that before McNair passed away, one of the staff called him a vulgar name for a female private part.

College football players are not allowed to form a union. In our view, this curtails their ability to seek recourse if their rights are being violated.

Before Durkin was fired, blame initially fell on strength and conditioning coach Rick Court, who resigned after McNair's death. Court was, in some ways, cast as a bad apple and the tragedy allowed to be seen as an isolated case of inattentiveness to one player's medical needs by a few replaceable athletic staff.

The wrong kind of firing

It's important to note that in being "fired," Durkin is still reportedly being bought out for the remainder of his five-year contract, valued at more than $5 million.

If the University of Maryland had taken the more difficult route of firing Durkin for just cause and taking away his payout, that would have sent a powerful message that players' lives matter.