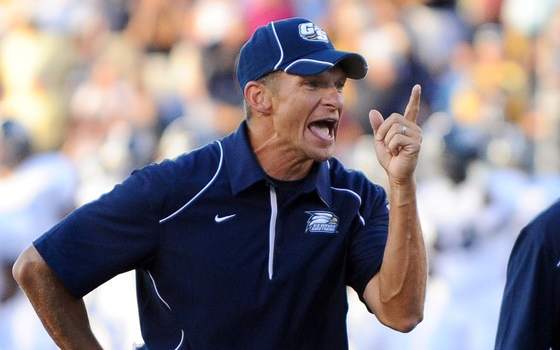 "I am thrilled to accept the head coaching position at West Point," said Monken, who became the 37th head coach to lead the Black Knights' historic program.

"Not only is the United States Military Academy one of the most prestigious academic institutions in the world, it boasts one of the nation's richest, most historic traditions in all of college football," he added.

Army will hold a press conference to formally introduce Monken to the media Dec. 30.

Monken said he will immediately meet with players and put a coaching staff in place so the team can begin buildup for the 2014 football season.

He led Georgia Southern to a 38-16 record in four seasons, appearing in three FCS semifinals and making headlines in 2013, the program's transition year to FBS, with a 26-20 upset of Florida in the Swamp.

The Eagles rode Monken's triple option attack for 429 rushing yards, the fourth most ever allowed by a Florida defense. He developed that offensive attack while working as an assistant under Paul Johnson at Navy and Georgia Tech.

"We want a successful head coach who understands the challenges of working at a service academy, one who could help us win immediately and one who understands the importance of West Point's mission. We found that in Jeff," Army athletic director Boo Corrigan said.

"Jeff has been highly successful at every stop he has made both on the field and off. We expect him to experience that same level of success at West Point. We could not be more excited to have Jeff, his wife Beth, and their three daughters join the West Point family and lead our football program," Corrigan added.