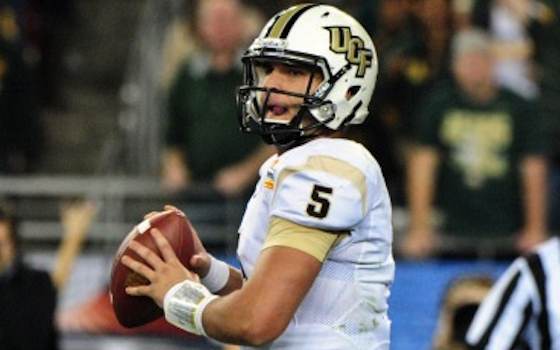 Blake Bortles accounted for four touchdowns to lead the No. 15 Central Florida Knights in an upset of the No. 6 Baylor Bears 52-42 at the Tostitos Fiesta Bowl at University of Phoenix Stadium.

Bortles threw three touchdowns on 20-of-31 passing and rushed 15 yards for another score.

Rannell Hall caught four passes for 113 yards and two touchdowns while Storm Johnson grinded out 124 yards on 20 carries and had three touchdowns.

A one-yard TD sneak by Bryce Petty and a 30-yard pass from Petty to Levi Norwood allowed Baylor to close in at 14-13.

But Bortles completed a pass to Rannell Hall for 50 yards for a touchdown that gave Central Florida a 21-13 advantage.

Another Bortles pass to Hall, this time for 34 yards, resulted in a 28-20 halftime lead for Central Florida.

Petty scored his third touchdown on 1-yard run in the third quarter and dashed in for the 2-point conversion to tie the game.

Bortles hit Breshad Perriman on a 10-yard touchdown pass and opened the fourth quarter by scoring on a 15-yard run to put Central Florida up 42-28.

It was the greatest victory in UCF football history. Watch the highlights from the Knights' historic 52-42 victory in the 2014 Tostitos Fiesta Bowl against the Baylor Bears