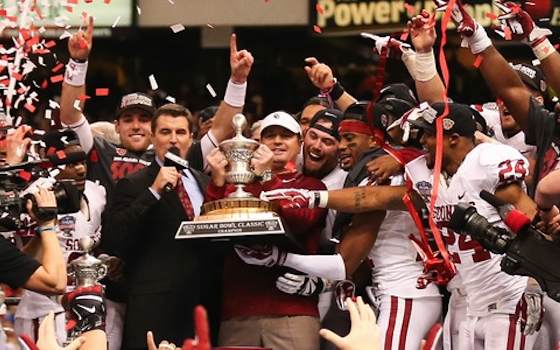 Trevor Knight completed 32 passes for 348 yards and four touchdowns to lead the No. 11 Oklahoma Sooners over the No. 3 Alabama Crimson Tide 45-31 Thursday at Mercedes Benz Superdome.

Knight was named MVP after setting a Sugar Bowl record with 32 completions and his four touchdown tosses equaled the bowl game's mark originally set by Florida State's Chris Weinke against Virginia Tech in 2000 and tied by Illinois' Kurt Kittner vs. LSU in 2002. With the win, Oklahoma improved to 11-2 on the year as the Sooners won their fifth Sugar Bowl in seven tries. Alabama finishes the 2013 season at 11-2 with an 8-6 all-time record in the Sugar Bowl

Alabama lead 17-14 in the first minute of the second quarter, but Oklahoma ended the first half with 17 unanswered points to take control of the game. The Crimson Tide made it a one-score game in the second half, at 31-24 with 8:49 to play in the third quarter thanks to Derrick Henry's 43-yard TD run

Knight then rifled a touchdown strike to Sterling Shepard to make it a two-touchdown game with 10:44 left.

Henry pulled Alabama within a score once more with a 61-yard TD with 6:22 to go.

The Sooner defense however quieted any comeback as linebacker Eric Striker stripped Alabama quarterback A.J. McCarron of the ball with a sack before defensive end Geneo Grissom scooped up the fumble and returned it eight yards for what proved to be the final score with 44 seconds in the game.

McCarron finished 19-of-30 for 387 yards, two touchdowns and two interceptions. Three hundred and one of his yards came in the first half. But his two interceptions set up Oklahoma scores and his fumble sealed their loss

Amari Cooper led Alabama with nine catches (for 121 yards) and Alabama's DeAndrew White led all players with 139 yards (on three receptions). Oklahoma's Derrick Henry finished the day with a game-high 161 all-purpose yards after running seven times for 100 yards to go with his 61-yard touchdown grab. Defensive back Eddie Jackson paced the Alabama defense with 10 tackles.