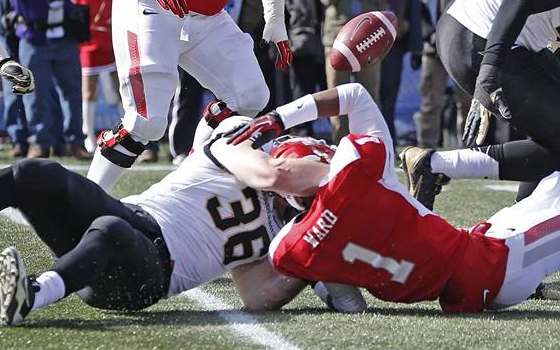 Vanderbilt scored 17 unanswered points in the fourth period en route to a 41-24 win over Houston in the 2014 Compass Bowl at Legion Field.

The Commodores led by 24-0 at the break but the Cougars tied the game with 24 straight points in the third, highlighted by two touchdown passes from John O'Korn.

However, Vanderbilt regained its composure as Brian Kimbrow and Jerron Seymour rushed for a touchdown apiece while Carey Spear buried a 35-yard field goal as the Commodores cruised to their second straight bowl win.

With the victory, the Commodores now have four bowl titles to their credit. Last year, they won the Music City Bowl, which they also won in 2008. They also won the 1955 Gator Bowl with a 25-13 win over Auburn.

Patton Robinette completed just six of 19 passes for 154 yards and two touchdowns but had two interceptions for the Commodores, who improved to 9-4 on the season and won nine games for the second year in a row for first time in school history.

Robinette also rushed for a score, Jordan Matthews caught five passes for 143 yards and two touchdowns to win MVP honors, Seymour rushed for 89 yards on 20 carries while Kimbrow added 75 yards on 13 touches for the Commodores.

Deontay Greenberry as the Cougars ended their campaign with an 8-5 mark.

Robinette put the the Commodores on the board with a 50-yard touchdown pass to Matthews. The quarterback then made it a 14-0 game with an eight-yard scoring run.

The Commodores then got a 24-yard field goal from Spear and another 50-yard pass from Robinette to Matthews for a 24-0 lead at the break.

However, the momentum shifted to Houston's way in the third period, tying the game at 24 with 3:19 remaining in the third quarter on a 67-yard pass by O'Korn to Greenberry.

Patton Robinette connected with Jordan Matthews on two 50-yard touchdown passes to lead Vanderbilt to a 41-24 win over Houston in the 2014 BBVA Compass Bowl.