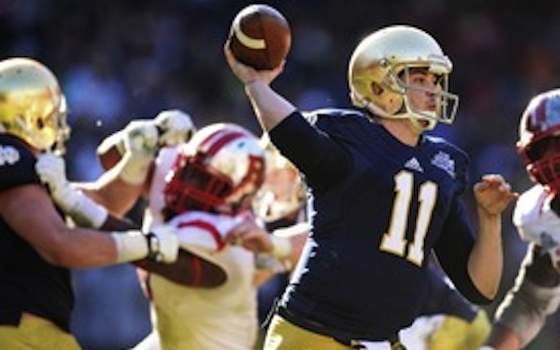 TJ Jones and Tarean Folston ran for a touchdown each while Kyle Brindza buried five field goals as Notre Dame defeated Rutgers, 29-16, to win the Pinstripe Bowl at Yankee Stadium.

Folston ran 17 times for 73 yards while Jones garnered 16 yards on four carries as the Fighting Irish remained perfect against the Scarlet Knights in five meetings to finish their season with a 9-4 mark.

In his final college game, Rees completed 27 of 47 passes for 319 yards and engineered three scoring drives in the fourth to help the Fighting Irish pull away for good.

Chas Dodd went 10-for-28 with a touchdown pass to Brandon Coleman but had three interceptions while Kyle Federico made three field goals for the Scarlet Knights, who ended their campaign with a 6-7 mark.

Coleman caught two passes for 65 yards while Paul James rushed 10 times for 48 yards as the Scarlet Knights were simply outmatched by the Fighting Irish in terms of yardage, 494-236.

However, the game was close in the first three quarters with neither team refusing to budge.

An eight-yard touchdown run by Jones in the opening period put the Fighting Irish ahead, 10-3 but Dodd retaliated with a 14-yard touchdown pass to Coleman to tie the count.

A field goal battle ensued with Brindza making three and Federico burying two as the Fighting Irish took a 19-16 lead early in the fourth.

Then, Notre Dame clinched a more comfortable 10-point lead behind Folston's three-yard scoring run before Brindza wrapped up the victory with a 49-yard field goal.

VanGorder will replace Bob Diaco, who left to become head coach at Connecticut. An official announcement is expected shortly after the NFL regular season ends.

VanGorder previously worked with Notre Dame coach Brian Kelly at Grand Valley State from 1989-91. He is in his first year as linebackers coach with the Jets after serving as Auburn's defensive coordinator last season.

With VanGorder at the helm, the Tigers went 3-9 with his defense, including 0-8 in Southeastern Conference play.

VanGorder also coached for the Jacksonville Jaguars and Atlanta Falcons. In his four years as defensive coordinator in Atlanta, the Falcons ranked seventh in the NFL in fewest points allowed.

Kelly said after Notre Dame's win in the New Era Pinstripe Bowl that the Irish have their new defensive coordinator in place, but he would not reveal the name because the contract has not been finalized.