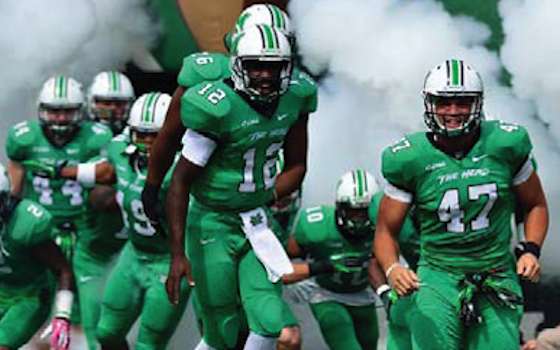 Rakeem Cato threw for 337 yards and three touchdowns to lead the Marshall Thundering Herd past the Maryland Terrapins 31-20 Friday in the Military Bowl at Navy Memorial Stadium.

Maryland (7-6) answered with a 29-yard touchdown throw from C.J. Brown to Levern Jacobs, but Marshall regained the lead with an 8-yard touchdown pass from Cato to Gator Hoskins.

After Maryland kicked a field goal, Marshall got one of its own for a 17-10 lead.

Maryland moved 81 yards in 10 plays to set up Brad Craddock for his second field goal and cut Marshall's lead to 17-13 at halftime.

A 99-yard march by Maryland produced a 2-yard pass from Brown to tight end Dave Stinebaugh, giving Maryland a 20-17 lead with 14:56 left.

Making its first bowl appearance under third-year coach Randy Edsall, Maryland closed out its association with the Atlantic Coast Conference by falling to the runner-up in Conference USA. Maryland will join the Big Ten next year.

"We felt that, as fast as they were going, we wanted to control the clock," Maryland coach Randy Edsall said. "The problem we had was we got down into the red zone and ended up kicking some field goals rather than getting touchdowns."

Rakeem Cato on his performance against an ACC opponent on a national stage:

"I tell the guys all the time, big time players make big time plays in big time games. I just wanted to come out here and lay everything out on the line and bring my team to a victory."