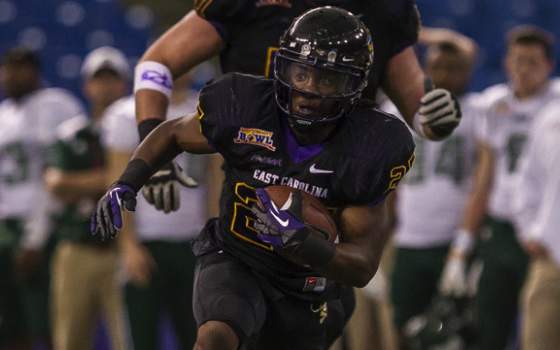 Cooper recorded a season-best 198 yards on 25 carries while fellow rusher Breon Allen ran for 43 yards and a touchdown as the Pirates won their first bowl game since beating No. 22 Boise State in the 2007 Sheraton Hawaii Bowl.

Shane Carden completed 29 of 45 passes for 273 yards and a touchdown pass to wide receiver Cam Worthy, who finished with two catches for 42 yards.

Then, Worthy and Carden reversed roles with the wide receiver finding the quarterback for a 14-yard touchdown pass in the fourth period.

With the victory, the Pirates accomplished their second 10-win season in school history. Their 10-3 record stands as the program's second-highest single-season total win.

Tyler Tettleton went 21-for-40 for 228 yards and a touchdown while sophomore quarterback Derrius Vick completed 3-of-3 passes for 100 yards and a score for the Bobcats, who failed to clinch their third straight bowl win.

Donte Foster caught six passes for 160 yards and a touchdown while Daz'mond Patterson has six receptions for 77 yards and a score as the Bobcats ended the season with a 7-6 record.

The two squads battled to a 17-all deadlock in the first three quarters before Josiah Yazdani put the Bobcats ahead with a 28-yard field goal.

However, Cooper ran for a 31-yard score after a five-play, 71-yard drive before Worthy's 14-yard touchdown pass to Carden for a 31-20 lead.

Cooper capped the Pirates' scoring with a 22-yard touchdown run late in the fourth.