Pink Flies High at the Grammys 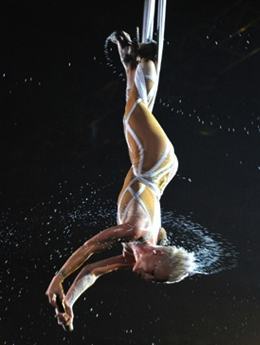 Pink Flies High at the Grammys

took four Grammys, including Album of the Year ... took a record six, including Song of the Year. Both young women performed at the peak of their form on Sunday night with Swift pairing beautifully with icon and ripping apart the rafters with "If I Was a Boy." And was already in TV viewers' minds after a ravishing interview tribute with on "60 Minutes." This lady is really something!

But in some ways, I thought the night belonged to Pink.

Ten years after her initial surge to fame with "Get This Party Started," the soulful-voiced blonde, had one of those classic gasp-inducing moments that usually fall to newcomers -- Mardi Gras-style extravaganza of some years back comes to mind. But I've rarely seen or heard anything as astonishing as Pink's rendition of "Glitter." The star was hoisted into the air suspended by a sheer piece of material, and performed an exquisite aerial ballet that would put Cirque du Soleil to shame. And she didn't miss a note -- singing, spinning, hanging by one leg, doused in water and spraying the audience like a sexy-but-ethereal human sprinkler. Pink has sold more than 30 million records worldwide. I'd love to see how sales of her albums do this week, following that masterpiece of showmanship.

I watched the Grammys with more attention than usual. I'd made a promise that at the very least I'd remember to tune in to catch Lady Gaga's opening act. For all the hype on this girl, I'd never seen her perform, although I'd found her charming in a recent TV interview.

So now I know what it's all about. Lady G. is a hell of a singer and she sure knows how to put on an entertaining show. There have been comparisons to Madonna, but when Gaga rolled out on stage, paired with , I saw that the Madonna comparisons were on the wrong track. Of course -- Gaga's inspiration is the Rocket Man himself. An artist with a great voice who unnecessarily -- but amusingly -- offers an offbeat way of dressing, to the point of absurdity.

Elton's calmed down a lot in recent decades, with the exception of a stray earring here and there and the random wacky jacket. (One felt Elton was there to pass on his mantle of over-the-top glitz to the Lady.) How many years will Gaga keep up the extraterrestrial glamour? Audience attention spans grow notoriously shorter. Will she ever come out in a simple gown and blow everybody away with her sound alone? Stay tuned.

Other Grammy highlights -- yes, I managed to stick with most of the show -- and on "Bridge Over Troubled Water," and Maxwell performing "Where is the Love."

The Michael Jackson tribute, which brought all the fire and passion , Usher, , and Smoky Robinson could muster, and of course, the much-desired appearance of Michael's children, Prince and Paris, accepting an award, and speaking briefly. They are both such beautiful children. seemed a bit paralyzed with nerves, but Prince spoke with unusual poise, and in his speech patterns, one could see cadences of his tragic, talented father.

I hope we don't see them trotted out much after this. Michael worked hard to keep them away from the show biz limelight. He knew the terrible toll of public exposure.

I admit my mind wandered during some of the hip-hop and rock acts, although Green Day's performance of a number from their coming Broadway musical "American Idiot" didn't cause me to flip the channel. In fact, it looked and sounded fascinating.

And no lady soared higher, in every way, than Pink. She didn't need to make a comeback. But she did. And I bet even today, two days later, she's topic A in the industry.