The Best Biography About Frank Sinatra 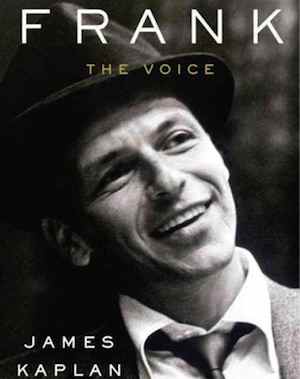 So ran a wire-service headline back in 1952, shortly before Frank Sinatra emerged from a five-year slump. He'd gone from the bobbysoxer's "Swoonatra" to MGM movie star, to washed-up crooner with a cracking voice and a messy personal life (Mafia ties, beating up gossip columnists and Ava, Ava, Ava Gardner.)

Frank Sinatra is the subject of a massive, fascinating new biography, "Frank: The Voice

," written by James Kaplan. The book is interesting for several reasons. For one thing, author Kaplan is a real music fan, and has an instinctive understanding of singers, singing and Sinatra's once-in-a-lifetime talent in particular. He takes the reader on a journey as Frank develops his talent, hones The Voice, studies the greats who knew how to truly interpret a lyric -- Billie Holiday, for one. Along with what he absorbed from his early bandleaders, Harry James -- and especially -- Tommy Dorsey. And I don't think I've ever read anything on Frank that has addressed his naked ambition so fully. He wanted to be a great star, and he let nothing stand in the way. For those whom he hurt on his climb -- well, as he later sang, "That's Life." Kaplan writes: "Virtually every move he made in his life had to do with the furtherance of his career." (His tale echoes the biographies of female singers who have been termed "ruthless divas" -- Streisand, Madonna, Diana Ross. But Sinatra ended up just being a great talent, and nobody much questioned his methods. Men, women -- the eternal double standard.)

KAPLAN PRESENTS the hard and soft of Frank: "Frank didn't have a heart of stone, but rather, one that was divided into a million chambers."

But what is most striking in this chronicle, is the emphasis on the soft. Or rather, Sinatra's insecurities, which would inevitably lead to aggressive behavior, or overemotional reactions, especially as things began to go wrong in the late 1940s. (Great stuff on Frank's relationship with his fearsome mother, Dolly, and the tortures suffered by his first wife, Nancy.)

In Kaplan's book, one finds a far more vulnerable Frank Sinatra than the ring-ding-ding Chairman of the Board who dominated the 1950s, '60s and even the '70s. (Publicly, at least, he rarely showed what might be termed vulnerability. Privately, as when I finally mended fences with him and we became friendly, his great charm retained traces of the boy from Hoboken, N.J.)

It is Sinatra's sudden decline, the messiness of it, that's truly gripping in "The Voice." Why? Because it's so ... feminine, almost. So very Judy Garland, in fact. Trouble with his voice, trouble with his studio, a careening private life, a constant tone of victimization -- nothing was ever his fault! And those dramatic attempts to end it all. It didn't seem very manly. (Aside from the pass Frank eventually received, because of his gender, he was lucky not to have been addicted. He was a heavy drinker, but he eschewed the drugs that destroyed Judy. He took better care of his instrument, too.)

SINATRA'S OBSESSION with Ava Gardner only emphasized his weakness. Her own restless, wildly insecure nature was too similar to Frank's for there to ever be compromise. She was "a gorgeous nihilist," writes Kaplan. "Frank had found a true partner in the soap opera that was his life ... behind every move each of them made lay a fine and regal contempt for the banal established order of the world." Yet, despite this, it was impossible for them to stay together. "The contradictions would torment him till the end of his days." Ava doesn't come off too well here, but Kaplan wasn't writing her story. For sure, she was a maddening creature.

(Unlike Elizabeth Taylor and Richard Burton, whose tempestuous marriage had also begun in scandal and tossing aside spouses, Frank and Ava made news whenever they were together -- because it was so rare! Photos would often show them arriving at airports or premieres in an obvious cloud of anger, walking separately. Liz 'n' Dick moved mountains, fortunes and movie studios to never be apart. They were usually beaming and clutching each other. Well, Elizabeth beamed. Richard looked shell-shocked.)

"THE VOICE" ends with Sinatra winning the Oscar for "From Here to Eternity." This was a role that Ava begged Columbia studio head Harry Cohn to give him, even though their marriage was on the rocks. Capitol Records had just signed Frank and this is where he would make his most magnificent albums. I was so wrapped up in the story, I found the conclusion jarring. Then I got it. Kaplan ended the tale of Frank's youth, struggle, rise, fall and rise.

The new Frank Sinatra emerged from that Oscar night: harder-eyed, more cynical, not to be possessed by any one woman, a Hollywood mover and shaker with a finger in every pie. So successful was his reinvention that nobody could remember the pathetic Frankie trotting after Ava, or taking too many sleeping pills, or losing his voice onstage.

He would reign in this manner until a waif named Mia Farrow made him look ridiculous. But not for long. He'd learned his early lessons. As the last sentence of Kaplan's book states: "He was Frank Sinatra."