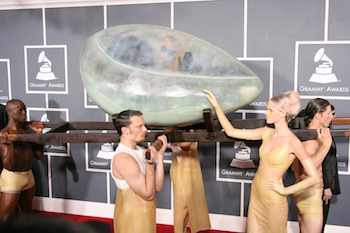 "MUSIC IS well said to be the speech of angels," said Thomas Carlyle.

Mr. Carlyle probably wouldn't have thought most of the music heard on the Grammy Awards was angelic, but he died in 1881 and Eminem was nowhere in sight.

The Grammys have already been well dissected by music critics and fashion mavens so I won't take up too much space here. But I'd be remiss not to say the show was pretty spectacular. And even if I didn't know some of the acts and a great many lyrics were indecipherable, it was a stunning collection of talent really putting on the dog for their peers.

As far as I was concerned the show could have ended after that dazzling display of vocal pyrotechnics by Jennifer Hudson, Christina Aguilera, Martina McBride, Florence Welch and Yolanda Adams in the opening tribute to Aretha Franklin. Every single woman up there did Aretha's classics proud. It was capped by the legend herself appearing on a huge screen, looking much thinner, but majestically elegant in low-cut white. She was so regal, so real, so beautifully articulate -- you knew you were in the presence of real genius, even if only by live satellite feed. What a woman!

THERE WERE other highlights and a few low points. But I never lost interest. I was primed for Lady Gaga, as I'd watched her with Anderson Cooper on "60 Minutes." She is a remarkable girl, outside the outre getups. (After all, she had a lot of influence on the eventual repeal of Don't Ask, Don't Tell" -- which, oddly, Anderson didn't mention.)

I loved her Grammy egg entrance and her vividly energetic number. I'm sure her fans know all the lyrics to her new song, "Born This Way," but I found it hard to understand. Still and all, she and her dancers were fabulous to watch. And what about those plastic prosthetic additions to her shoulders?

(A wiseacre I know said of Gaga's egg, "Very appropriate. After all, Madonna laid her." I asked what he meant? He said, "Look, she sings better than Madonna. She moves better than Madonna. She's been classically trained on the piano. But she ain't doing or writing anything Madonna didn't do 25 years ago. Her empowerment message is terrific, but hardly groundbreaking." Everybody's a critic.)

Justin Bieber sang quietly on guitar -- and very well, too -- before going into a raucous hip-hoppy number with Usher and Will Smith's young son.

I really enjoyed a young girl named Janelle Monae who blasted out something titled "Cold War." She set the place on fire.

And I thought another young performer, Bruno Mars, was impressive.

Rihanna was all over the night. On the red carpet in a dress that appeared to be so revealing that an E! correspondent said he, "didn't want to look down!" and onstage with Eminem and Drake in two separate performances (and two more revealing getups.) She sizzles, no doubt about it, although her hair hanging in her face all night began to irritate me. She's so pretty.

Eminem. Could not understand a word of his intense rapping, but it is hard to deny his presence, energy and charisma. He has made a remarkable comeback and his acceptance speech was sweet and humble. And he's rather handsome when he calms down and isn't screaming.

AND NOW to what didn't appeal to me at all. Bob Dylan's standard mouthful of marbles. He was never a great singer, but once upon a time he was able to interpret lyrics for a generation and you knew what the hell he meant. It was like watching somebody speak in tongues.

The audience went crazy for Mick Jagger, singing "Everybody Needs Somebody to Love." I had to ask on this, as Mick's performance certainly didn't enlighten me. He's nearly 70, he looks it, and I found his yelping and gyrating embarrassing to behold. It was great he was there -- it was his very first Grammy appearance -- but even for male rockers there comes a time to close at least one of the curtains. (Madonna, are you listening? Re-invent your stage persona. Your most devoted fans would approve, believe me.)

FINALLY, there was Miss Barbra Streisand. I guess Jim Brolin could not persuade Barbra that Miss Ellen's "poteers" would really not make a good dress. Still, I don't think I've ever seen Barbra in anything similar -- ever. So that was something new.

Introduced by her "A Star is Born" costar Kris Kristofferson, Barbra sang her own Oscar-winning love song from that movie, "Evergreen." Suffering from nerves -- it was obvious -- and a somewhat dry throat, this was not Barbra's smoothest, strongest rendition of the song. But I found it one of the most touching and human moments of a great career. She was clearly disappointed in her own vocals, but she gave it every ounce of meaning -- more perhaps than ever, because the fabled voice was having an off night. When the song ended, Streisand exclaimed, "I was so nervous!"

Nerves weren't such a bad thing for a star who is often considered chilly and removed. And to be honest, I preferred Barbra's slight straining to Christina Aguilera's supernatural notes. Christina was undeniably stratospherically impressive, paying tribute to the Queen of Soul. Barbra touched the soul.

That was pretty much it. Barbra presented "Album of the Year" to a scruffy band called Arcade Fire, which seemed to drive the audience mad with joy. It also drove Miss Streisand and her crinolines offstage.

OH, ONE last thing -- a fashion note. The prettiest girl in the prettiest dress on the red carpet was teenager Selena Gomez. She is the star of TV show, "Wizards of Waverly Place." She looked grown up, but not too much so. The dress was exquisite, a new-style version of 1930s glamour. She is a very appealing actress, too. Both she and her "Wizards" charismatic co-star David Henrie are leaving "Wizards" this year. Miss Gomez might have well made her best career move yet, Sunday night.