What Saudi Arabia, Iran, and Israel Have in Common 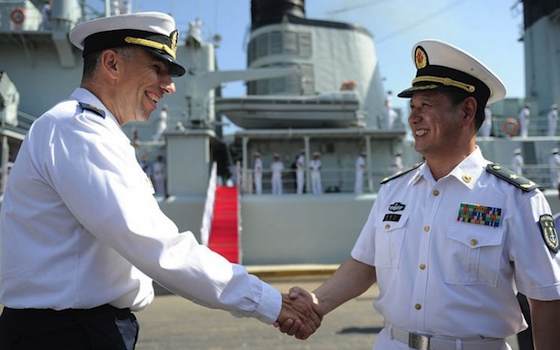 If there is a nation (not "state") that can successfully convince the Arabs, the Jews and the Persians to sit down simultaneously for a talk, it can only be the Chinese. With the historical cultural links and for immense economic interests, China is both eager and able to lay the table.

Having had the 11,179-kilometer (6,946-mile) iron silk road in operation going through Germany, Poland, Belarus, Russia, Kazakhstan and China, Beijing is now working assiduously to push for the implementation of the United Nations 80,900-km Trans-Asian Railway (TAR) project which knits 24 countries including Iran, Armenia and Turkey together. Furthermore, the August 2013 opening of the US$500 million Chinese-built port in Colombo, Sri Lanka, represented the first step of realizing Beijing's vision of a "maritime silk road" between Africa and East Asia, exposing the Arabian Peninsula as a key mid-way security concern. Being blocked by Japan to go eastward, China has tons of reasons to get the west bound roads through and reliable.

In June 2013, Beijing hosted a two-day United Nations meeting with attendance by Secretary General Ban Ki-moon to discuss how to revive the peace between Israel and Palestine. This rare move by Beijing is a sign that its leaders are keen on bringing safety to the new Silk Roads being constructed. While ordinary Americans may not care about peace in the remote Middle East, it is about daily life in China. Two Chinese state-owned enterprises recently made a 50-year deal with Ukraine that up to 7.4 million acres of high-quality farmland in the eastern Dnipropetrovsk region will be growing crops and raising pigs for China. It is just a tiny portion of the supplies of food, energy and all types of natural resources that Beijing has to make sure that they can be delivered to China from Europe, Africa and western Asia by rail and sea efficiently.

Total trade amount between Saudi Arabia and China jumped from US$25,367 million in 2007 to US$63,710 million in 2011, with crude export to China exceeding the same sale to the United States for the first time in 2010 (National Bureau of Statistics of China). Aside from numerous refinery and infrastructure projects, their relationship was further recognized by the granting of the privilege to the then Chinese president Hu Jin-tao as the second foreign leader in its history to give a speech to the Kingdom's legislative council in 2006. The friendship between the two nations can be traced back to the ninth century during which the business-minded Arabian merchants walked along the silk road with fleets of camels from Mecca to Xian for, of course, silk. While there is no sign that this friendship was eroded by Beijing's stand in the Syria crisis, the Obama-Putin wrestle showed Riyadh that the U.S. is no longer the sole bookmaker in this region. It is time to consider drawing in new players.

The Jews' relationship with the Chinese was always sweet in history. "Seventy years ago, only Shanghai opened the door to provide a sanctuary to Jewish refugees," Israeli Prime Minister Benjamin Netanyahu said in his visit to Shanghai in May 2013. "From the early 1930s, tens of thousands of Jewish refugees who fled Europe made Shanghai their home." In 2011, the trade amount between Israel and China was not that much at US$9,778 million, but it is no ordinary goods and services. Despite heavy pressure from the Pentagon, Israel has been selling certain weapons and military technologies to China since the formal establishment of diplomatic relations in 1992. Given China's ties with other Islamic nations, this kind of mutual trust is incredible.

Commodity and cultural exchanges between Iran and China can also be traced back to the Tang Dynasty (618-907AD). When the Persian merchants went to China for silk and tea, they were free to preach their religion in the Middle Kingdom without interference. While they kept on fighting against the Ottoman Empire, the Persian never had trouble with the Chinese. In 2011, the trade between these two historically friendly nations amounted to US$45,103 million. China is now not just the major buyer of Iran's crude, but also the leading supplier of all types of goods and services in the wake of the embargo worldwide. When the then Iranian president Ahmadinejad attended the Shanghai Co-operation Organization summit in Beijing in June 2012, he was told by Hu "to engage in serious dialogue with other world powers and show flexibility in resolving disputes triggered by Tehran's nuclear programme." Such flexibility was first seen under the new Iranian president Hassan Rowhani that Tehran would participate in the Geneva talk, prompting the U.S. Secretary of State John Kerry to rush for a deal on November 8, 2013.

Israel and Iran will certainly continue to have wars of words but the Chinese helmsman rulers who purse persistently for peace in this region behind the scenes will add a strong force to the drive already pushed by the Kremlin and White House. When the three top military and economic superpowers are so ‘friendly' and so ‘enthusiastic' to ask you to talk instead of fight and there is no one else you can rely on, it means you do not have alternative. The Saudi, Israeli and Iranian leaders will show up around the table soon.

"What Saudi Arabia, Iran, and Israel Have in Common"