Turkey & Israel: There and Back Again 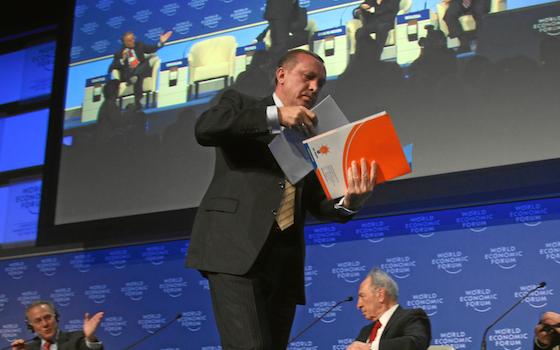 Turkey & Israel: There and Back Again (Photo: Matthew Powell / Flickr)

In the past few years, relations between Turkey and Israel have been strained. The current status quo that resulted from the 2009 Davos World Economic Forum, and especially the Mavi Marmara incident in 2010 could only be described as an unraveling of the Turkish-Israeli ties of the 1990s and early 2000s. It certainly seems that the previous mutually beneficial strategic and economic partnership between the two countries is a thing of the past. However, the situation is not as it seems.

The Turkish-Israeli relationship was one of the by-products of the new world order that emerged after the dissolution of the Soviet Union. After half a century of Cold War dynamics, the world switched to a unipolar system, in which the United States was the only reigning superpower. As a result, Turkey's and Israel's geopolitical position could no longer hold the clout it once held. A new direction was necessary for both countries to be able to survive in their in flux milieu.

Due to the shifting nature of the Middle East, their relationship would have to become a foundation on which both countries could rely. Their partnership was built on strategic and economic interests that would be able to outlast any short-term turnarounds in foreign policy.

One could compare this relationship to the one France and Germany shared after the 1950s. Ever since the annexation of Alsace -- Lorraine by Germany in 1871, an animosity developed which led - in part - to the First and Second World War. After that period, it was imperative for both countries to mend their relationship and build ties within the European Community that would prevent such hostilities as well as provide stability to the European continent. Although there was no such animosity between Turkey and Israel until the 1990s, both countries recognized the necessity of creating a stable environment, one beneficial to their future. It is noteworthy that Turkey was one of the first countries in the Middle East to recognize the state of Israel, as early as March 1949, and that in 1958 an Israeli-Turkish covert intelligence alliance (the "peripheral pact") was formed. They upgraded their relations to full ambassadorial status in 1991. Furthermore, their economic and strategic partnership was formalized in 1996 with the signing of a free-trade agreement and of an agreement on armaments, launching an era of close ties that would last until 2009.

The factors behind this agreement were different for the two countries. On the one hand, Turkey was looking for a wealthy partner able to invest in the country's infrastructure and economy, to provide the technological know-how and the ability to cooperate on intelligence regarding the terrorist activity of the PKK (Kurdistan Workers' Party) and Armenian organizations, such as the Armenian Secret Army for the Liberation of Armenia. On the other hand, Israel was looking for an ally in the region that could give the country access to new markets as well as become a buffer in times of conflict with the Arab states. This led Turkey to maintain a seemingly neutral position with regard to the Palestinian issue during the 1990s since the Oslo talks were underway. In fact, President Shimon Peres, in 2007, was the first Israeli leader to appear in front of the parliament of a Muslim country, indicating the closeness of ties between both countries.

The relationship prospered during the 1990s and was advantageous for both countries but reached a turning point in 2009. In 2003, the AKP party won the elections in Turkey. An Islamist party at heart, and with Recep Tayyip Erdogan at its head, the AKP gradually shifted Turkey's Western state model (in place since 1920) to one more attuned with Middle Eastern sensibilities. It is now evident that a normalized relationship with Israel could not fit into the wider sphere of influence that Turkey was aiming to secure. Consequently, publicly and in international fora, Turkey stopped backing Israel, or at least ceased maintaining a neutral position towards it. This came to a head at the Davos World Economic Forum in 2009 when Turkish Prime Minister Tayyip Erdogan stormed out after a clash with Israeli President Shimon Peres over Israel's offensive against Gaza, in which 1,300 Palestinians were killed. During the heated debate, the Turkish PM called the offensive very wrong and adding "when it comes to killing you know well how to kill". He was welcomed as a "hero" upon his return to Turkey. The following year, the Gaza Freedom Flotilla (organized by the Free Gaza Movement and the Turkish Foundation for Human Rights and Freedoms) broke the Israeli blockade of the Gaza Strip to transport humanitarian aid. Israeli commandos boarded the ships in an effort to redirect them to the nearest port. A struggle ensued in which nine Turkish citizens were killed. The incident's repercussions were immediate and consistently made the news in the months that followed. This undermined Turkish-Israeli diplomatic ties and previously-signed industrial-military contracts which were temporarily suspended. Turkish leaders sought to defame Israel at any opportunity that presented itself at the international and domestic level. This attitude cemented a particular line of thought in Turkey, one that is shared in Turkish academic circles: the AKP administration is, very convincingly, taking advantage of the Turkish-Israeli break-up in electoral disputes, as evidenced by the results of the municipal elections of March 30,2014. Around 45 percent of Turkish citizens voted for the AKP party despite Prime Minister Tayyip Erdogan's authoritative policies and corruption scandals. On the domestic front, it is now common for opponents of Tayyip Erdogan, such as the Gülen Movement, to be vilified as pro-Israeli.

Although the publicized spectacle of the break-up is quite evident, on a strategic and economic front, the situation could not be more different. Indeed, military and security officials of both countries continue to meet, although in a far less public way than before, while investments and contracts are, for the most part, increasing.

For the past 50 years, Israel's Mossad agents have been free to expand their human intelligence network throughout Turkey, while Turkish pilots enter Israeli airspace and Israeli planes use Turkish bombing ranges. In addition, bilateral trade in 2012 reached a new high at USD 4 billion, mostly due to the Syrian civil war that forced Turkey to reorient its exports and imports toward and through the Israeli market. Reports of Turkish-Israeli intelligence cooperation on the situation in Syria were quickly rejected by the Turkish Foreign Minister Ahmet Davutoglu. In the end, both countries need each other as they are bound by both geographical proximity and geopolitical interests.

Although Turkey is taking advantage of the dispute for all it is worth, both countries are aware that their shared interests are too vital to be cast aside in the long run. One will have to make a gesture of good faith for the cooperation to be officially renewed, and it certainly looks like Israel, in this instance, is the one willing to apply Realpolitik to the problem at hand, even if Israel's willingness is a result of US pressure. One of the deciding factors behind the Turkish-Israeli partnership was to prevent Israel from being isolated in the region. The rapprochement with Cyprus and Greece was a direct outcome of that isolation. Nevertheless, it could not replace the diplomatic void left by Turkey in Israeli foreign policy. After issuing an informal apology by Prime Minister Benjamin Netanyahu, negotiations are underway for Israeli reparations to the families of the nine Turkish victims of the Mavi Marmara incident. Turkey, however, is seemingly proving hard to please. The settlement is expected to be approximately USD 20 million. Soon after the apology, billboards were raised praising Erdogan's triumph and ridiculing the Israeli Prime Minister. Behind the scenes relations are improving. Even the recent intelligence scandal, regarding the "burning" of 15 Mossad agents in Iran, attributed to Turkish secret services, was eventually debunked. Although grievances might still be apparent publicly, behind closed doors they have been put to rest. It is an advantageous situation for the AKP administration, since Turkey upgraded its status as a leading country in the Middle East and managed at the same time to maintain its economic and strategic ties with Israel.

Nonetheless, Israel's recent and ongoing Gaza operations have put the reconciliation to the test, providing the AKP administration with the perfect ammunition for delaying it and rallying up support for the presidential elections of August 2014.

"Turkey & Israel: There and Back Again"